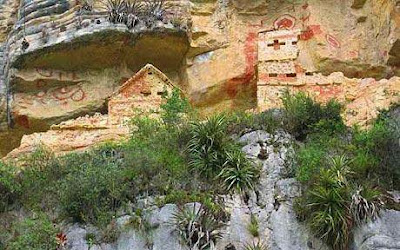 The recently discovered citadel is on the edge of a cliff, providing an excellent vantage point for spotting approaching enemies.


More news is coming out of the northern jungles of Peru regarding the newly discovered citadel belonging to the “Cloud People,” the latest an article in the London Telegraph.

The buildings found on the Pachallama peak are in remarkably good condition, estimated to be over 1,000 years old and comprised of the traditional round stone houses, according to the Telegraph.

The area is completely overgrown with the jungle now covering much of the settlement but explorers found the walls of the buildings and rock paintings on a cliff face. Archaeologist Benedicto Pérez Goicochea said: "The citadel is perched on the edge of an abyss. We suspect that the ancient inhabitants used this as a lookout point from where they could spot potential enemies."

The ruins were initially discovered by local people hacking through the jungle. They were drawn to the place due to the sound of a waterfall. The local people "armed with machetes opened a path that arrived at the place where they saw a beautiful panorama, full of flowers and fauna, as well as a waterfall, some 500 metres high," said the mayor of Jamalca, Ricardo Cabrera Bravo.

When in 1535 the Spanish Conquistadores arrived in Peru, they found willing allies in the Cloud People for their fight against the Incas. They were eventually wiped out by small pox and other diseases brought by the Europeans. The women of the Chachapoya were much prized by the Incas as they were tall and fair skinned. The Chronicler Pedro Cieza de León offers wrote of the Chachapoyas:

"They are the whitest and most handsome of all the people that I have seen in Indies, and their wives were so beautiful that because of their gentleness, many of them deserved to be the Incas' wives and to also be taken to the Sun Temple."

Click here for the Telegraph article, plus a video on a Peruvian mummy.

Posted by Gregory LeFever at 11:01 AM