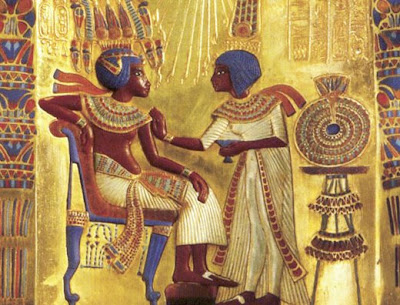 This scene, depicted on the backrest of King Tut's throne, shows how he would lean back in a relaxed manner while his wife, Anchesenamun, rubbed ointment into his shoulder.


An inscribed limestone block appears to solve one of history's greatest mysteries: who fathered King Tut?

"We can now say that Tutankhamun was the child of Akhenaten," Zahi Hawass, chief of Egypt's Supreme Council of Antiquities, tells Discovery News.

Hawass discovered the missing piece of limestone block a few months ago in a storeroom at el Ashmunein, a village 150 miles south of Cairo. Once reassembled, the slab has become "an accurate piece of evidence that proves Tut lived in el Amarna with Akhenaten and he married his wife, Ankhesenamun," while living in el Amarna.

The finding offers evidence against another leading theory that the minor king Smenkhkare was King Tut’s father.

The text also suggests that the young Tutankhamun married his own half sister.

"We know that the only king to whom the text could refer as the father of both children is Akhenaten, himself. We know from other sources that Ankhesenamun was the daughter of Akhenaten and Nefertiti. Now, because of this block, we can say that Tutankhamun was the child of Akhenaten as well," Hawass said.

Let's allow someone not beholden to the dogma shine some light on Tut's lineage.

We know that Echnaton (=Akhenaten, who is King Saul) obtained a Queen of the Amazons from around the Black Sea as his wife (this was Nefertiti). She was the HITTITE QUEEN. Indeed, when Saul died, it was Nefertiti, under the name Ankhesenamun (= Ahinoam, A(nkh)-he-noam) who asked for a Hittite son to be King of Egypt:

"According to Hittite history, it was during the seige of Carchemish that Suppiluliumas received a message from widowed Queen Ankhesenamun, asking him for one of his sons to be king of Egypt."

Nefertiti was the wife of Echnaton (neo-Egyptological Akhenaten), both wrongly transcribed. Echnaton is actually King Saul of the Bible. Echnaton is Ish-Naton "father Nathan" and his (i.e. Saul's) son Jonathan is "young Nathan", Jo-Naton, so that these were Nathan Sr. and Nathan Jr. One could also view the names as being old (n)Aton and young Aton. Nathan in Hebrew means "gift of God" and compares to Adonis or Adonija.

The name "Saul" was applied biblically to the "Sun King" because Saul is an Indo-European term for "sun", as in the Latvian term Saule meaning "sun". King Saul viz. Echnaton viz. Akhenaten was a sun worshipper and became known to us as the first monotheistic king for this solar worship, which was presumably imported by his Hittite wife.

Nefertiti (correctly "Chetite") is rendered in the Bible as Ahinoam ("daughter of Ahi"), and Ahi was the Egyptian vizier, a Hittite, now transcribed as Ay:

"Nefertiti's origins are confusing. It has been suggested ... that Tiy was also her mother. Another suggestion is that Nefertiti was Akhenaten's cousin. Her wet nurse was the wife of the vizier Ay, who could have been Tiy's brother. Ay sometimes called himself "the God's father," suggesting that he might have been Akhenaten's father-in-law."

Noam in Hebrew means "pleasant, gentle, sweet, kind, and tender" and noam is actually the "male" version of no'omi, i.e. Naomi, so that a later Biblical gender change has occurred in this name. Nefertiti is translated similarly by the Egyptologists as "the beautiful one". Ahinoam is translated as "brother of pleasantness" which of course can not be right since this is a female. Accordingly, the name of the Hittite Queen was NAOMI "the pleasant one".

Biblical scholars also err in thinking that there are two Ahinoams, i.e. Naomis, one Ahinoam as the wife of Saul and Ahinoam of Jezreel (Israel) as the wife of David. Obviously, these are one and the same person, as David took the wife of Saul (Nefertiti) into his court upon Saul's death.]

Hope that clears up the myth a bit?

So, the father of Tut was Echnaton (Saul), no argument there, but who was his mother? Ecnaton's other Royal wife, the widow of his father. Yes, Tut's mother was also his grandmother.

Go figure it out, and release the dogma.....you'll find it unclouds the mind.

Forgive me. I want to study what you're saying here but must leave for awhile. The comments you've left on several other posts are highly intriguing and worth more research.

I understand what you're saying about the orthodox interpretation of ancient history, much of which could easily be based on fable, myth and folklore.

I don't know who you are, but you've obviously spent considerable time and effort compiling your scholarship, which I respect.

The above poster's ignorance is matched only by his illiteracy. Maybe someday you and your people can rise to the level of the ancient Egyptians, but no, you're not descended from them.

Umm.. why has Hawass hidden the DNA results for Tut and all other Egytian royal mummies?
It slipped out during TV coverage that Tut's results are paternally R1b-m269, which is common to modern west europeans.

Once one begin to understand that the marriage for the purpose of 'inheritance' to royal kin was only done to maintain the family's treasures,as lands, status, and wealth, etc.. and that there were also other marriages done simultaneously with spouses that were not kin, that is never mentioned by bias perverted european, knowing that in the ancients, Afrika black men had multiple other wives, and children, then you'll know how the Afrikan customs are truly done...

Once one begin to understand that the marriage for the purpose of securing their 'inheritance' to royal kin was only done to maintain the family's treasures,as lands, status, and wealth, etc.. and that there were also other marriages done simultaneously with spouses that were not kin, that this is never mentioned by bias perverted european, knowing that in the ancients, Afrika black men had multiple other wives, and children, then you'll know how the rich Afrikan customs are truly done...