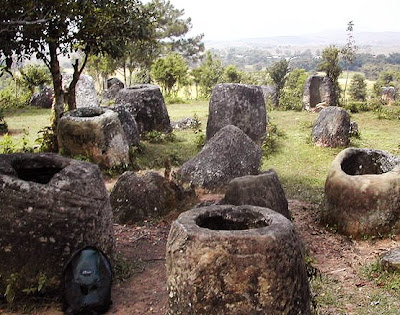 A few of the 2,000 massive jars scattered across the Laotian plain.

Archaeologists are continuing to explore the mysterious Plain of Jars in northeastern Laos despite great personal risk. Some 2,000 gigantic jars are scattered across the highland where the U.S. during the Vietnam War dropped millions of cluster bombs, 30 percent of them still unexploded.

According to an article in Malaysia's The Star magazine, UNESCO archaeologists are continuing to dig in seven out of 58 identified jar sites.

“We believe the Plain of Jars holds a piece of the puzzle of an ancient civilization that is now extinct,” says archaeologist Julie Van Den Bergh, chief technical advisor for the Lao-Unesco Safeguarding the Plain of Jars program. “The jars date back to the Early Iron Age (500 BC to 200 CE). But who made these jars? There are an estimated 2,000 jars so there must have been a huge civilization then that has vanished 2,000 years ago. What were the people doing here? Were they trading?”

The jars are in clusters, some with as many as 400 in a grouping. Some are about nine feet tall and weigh 13 tons. Several come with angular or round disks that could have been lids, carved with images of humans, monkeys or tigers.