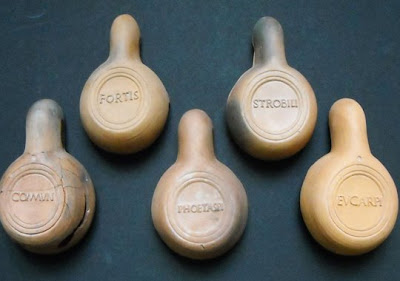 A selection of oil lamps recovered in Modena, with the bottoms of the lamps clearly marked with their brand names, Fortis being the most popular.


Italian researchers have discovered the ‘factory town’ where oil lamps that lighted the ancient Roman empire were made. Ruins were found in the north-central Italian city of Modena, near the city’s ancient walls.

"We found a large ancient Roman dumping filled with pottery scraps. There were vases, bottles, bricks, but most of all, hundreds of oil lamps, each bearing their maker's name," Donato Labate, the archaeologist in charge of the dig, told Discovery News.

Firmalampen, or "factory lamps," were one of the first mass-produced goods in Roman times and they carried brand names clearly stamped on their clay bottoms. Modena contained lamps by the most famous brands of the time: Strobili, Communis, Phoetaspi, Eucarpi and Fortis.

These manufacturers had their products sold on the markets of three continents. Fortis was the trendiest of all pottery brands and its products were used up to the end of the second century A.D.

“Fortis gained such a name for its lamps that its stamp was copied and reproduced throughout the empire. It was one of the earliest examples of pirated brands," Labate said.

Scholars have long thought that the fashionable Fortis originated from Modena -- then called Mutina -- but until now no evidence had been found for that claim. "We know now for sure that Fortis came from Mutina. The city was a major pottery center, a cluster of pottery workshops, as the variety of brand names on the newly discovered items testifies," Labate said.

Labate added that kilns were located outside the city walls to prevent fires from breaking out in the city.

Posted by Gregory LeFever at 11:04 AM