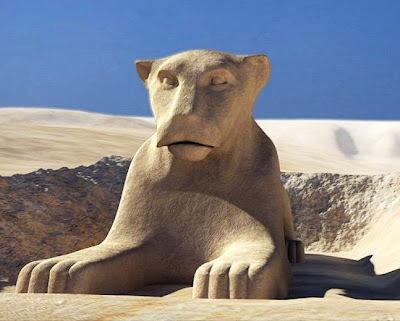 Digital rendition of Sphinx with an original lion's head. 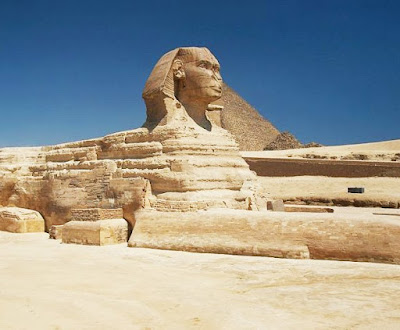 The Sphinx as it looks today with its pharaoh's head.
A concept long argued by some past and current archaeologists and Egyptologists ~ that the Sphinx is much older than usually thought and that its pharaoh’s head is a revision of an earlier head ~ are now receiving publicity again.

Accepted thought is that the monument outside Cairo, which has the head of a pharaoh and the body of a lion, was built around 4,500 years ago. But geologist Colin Reader has found that rain erosion suggests it was built many years earlier, long before the building of the pyramids.

Researchers have also determined that the Sphinx’s body and head are disproportionate, suggesting it was not originally a pharaoh. Historical architect Jonathan Foyle, who worked with Reader on the project, says the head and body are massively out of proportion, adding that the reason could be that the Sphinx originally had an entirely different head ~ that of a lion. To early Egyptians the lion was a much more potent symbol of power than the human face.

The Great Sphinx is thought by most Egyptologists to represent the likeness of King Khafra. It is also believed by others that Djadefre, the elder brother of Khafra, built the Sphinx to honor his father Khufu. This would place the time of construction somewhere between 2550 BC and 2450 BC.

However the limited evidence linking the Sphinx to Khafra is circumstantial and somewhat ambiguous, according to the London Daily Mail.

Geologist Robert Schoch concluded that the Sphinx must be much older than currently believed after an investigation in the 1990s. He claims the amount of water erosion the Sphinx has experienced indicates a construction date no later than the 6th millennium BC or 5th millennium BC, at least two thousand years before the widely accepted construction date and 1,500 years prior to the accepted date for the beginning of Egyptian civilization.

Posted by Gregory LeFever at 4:47 PM

Have you expanded on this to show the sphinx in relation to the red, black and white pyramids in the picture?

I was there many years ago and this rendition resonates with my experience of this immemorial edifice.

Thank you. It's so obvious that the Sphinx's current head is tiny and out of scale. The Sphinx is over 12,000 old.