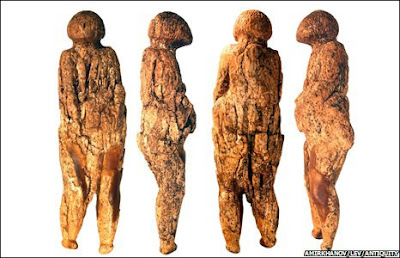 
Russian archaeologists digging southeast of Moscow have unearthed a cache from the Stone Age, including two human figurines, an inscribed rib from a mammoth and another small carved bone.

"The finds enrich the inventory of Upper Palaeolithic art and broaden the known distribution of specific types of art objects in the East European Upper Palaeolithic," Dr. Sergey Lev of the Russian Academy of Sciences told BBC News. "In terms of the splendour and variety of its art pieces, Zaraysk is on a par with such famous sites as Kostenki and Avdeevo."

The 22,000-year-old figurines are a type of "Venus" statuette, examples of which have been found in locations ranging from the mountains of Spain as far east as Siberia. However, their cultural significance remains a point of debate among anthropologists.

At Zaraysk, the two figurines were found carefully buried in storage pits. Underneath each was a round deposit of fine sand toward the south; toward the north, there was a deposit of red ochre, an iron-based pigment. Each of the figurines had been covered with the shoulder-blade of a mammoth.

One is presumed to be finished and stands at a height of nearly 7 inches the other is clearly unfinished and about half as big. Both resemble examples of such statuettes found at the Avdeevo site to the southwest, suggesting cultural links between the two.

"This collection of artefacts is spectacular in a number of ways, not only for the range of representations of both humanistic and animal but also for the range of materials that is used," says Jeffrey Brantingham, an anthropologist at the University of California, Los Angeles (UCLA). "These finds are really incredibly rare, and they offer a unique picture into human Upper Palaeolithic life."

Posted by Gregory LeFever at 10:12 AM