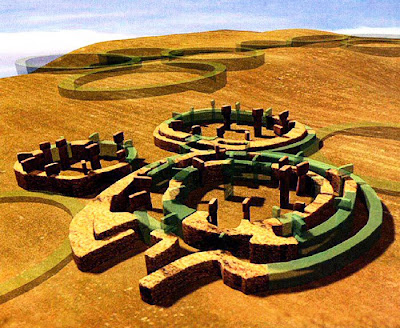 Digital image showing layout of the large temple and placement of the pillars, which are thought to have supported some sort of roofs. Photos below depict some of the carvings on the ancient pillars.


Research surrounding the extraordinary Gobekli Tepe temple in Turkey ~ whose pillars are judged to be 5,000 years older than any other structure ever found on earth ~ continues to ignite debate.

An article this week on EurasiaNet, an online news service, discusses what the temple tells us about the origins of agriculture. Scientists are taking deeper looks into the impact of climate change as well as the more mundane motive of supplying large amounts of food necessary for huge hunter-gatherer ceremonies.

Here is that portion of the article.

But debate still rages - and probably always will - about what it was that led Neolithic groups to transfer almost all their energies into farming.

For many experts, climate change was behind the transformation. Global temperatures had been warming gradually since the last Ice Age. Between 10,800 and 9,500 BC., they suddenly plummeted again. 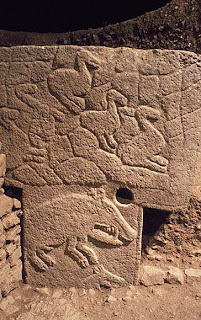 The Greenland ice cap cooled by roughly 15 degrees. Rain stopped falling on the Fertile Crescent. "The region where grasses could be cultivated shrank to the very upper edges of the Middle East, northern Syria and southeastern Turkey," says Ofer Bar-Yosef, MacCurdy Professor of Prehistoric Archaeology at Harvard and a doyen of paleolithic studies.

"Even there, resources were limited - people wanted to keep them for themselves."

But the location, age and sheer size of Gobekli Tepe have led some to posit a radically different explanation for the change. "The intense cultivation of wild wheat may have first occurred to supply sufficient food to the hunter-gatherers who quarried 7-ton blocks of limestone with flint flakes," writes Stephen Mithen, Professor of Archaeology at the University of Reading, in the United Kingdom.

The move to farming may "have been driven as much by ideology as by the need to cope with environmental stress."

Klaus Schmidt appears in two minds about the theory. In a book he wrote in German about Gobekli Tepe, he suggests that "temples came first, and cities followed." Sipping sugary tea outside a portakabin at the entrance to the site, he is more circumspect.

"There is no doubt this was a place of huge feasts, and hunter-gatherers would have had difficulty gathering together enough food to feed large groups," he says. "Some American colleagues say such feasts may have been the origin of domestication."

His caution stems from growing evidence uncovered over the last five years or so that domestication was a much longer process than previously believed. 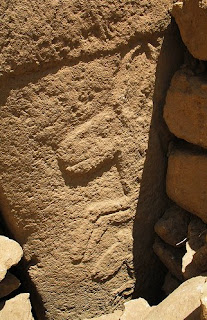 Experts now think farmers probably sowed grain for at least a thousand years before domesticated strains appeared. In 2004, French archaeologists showed how neolithic settlers had corralled wild cattle in southern Turkey before transporting them to Cyprus.

Professor Bar-Yosef has had his doubts about the theory of ideological farmers since the start. "First you need to get your economy working," he says. "Then you build the monuments that justify the complex social organization that requires."

Complex, he adds, can sometimes mean unjust. "You can’t build places like Gobekli with kibbutzim," he says. "I wouldn’t be surprised if somebody somewhere in the Fertile Crescent finds evidence of slave labour in the near future."

Posted by Gregory LeFever at 12:17 PM

Yes, someone with a strong spirit connection, convinced of the stories that were told, elaborating on them, creating a need for temples in this way and organizing slave labor because he (she?) can. Though, perhaps the organization was more lord and serf like than actual slavery. Slaves means armies to get them. After the first one the rest come as natural consequences.

This is formed in agricultural need I think, but forces more agricultural involvement, so it would be difficult to say which comes first. What I can feel is right is that temples permit widespread agriculture around them where small scale agriculture is required for temples to be built in the first place.

It certainly is the proverbial chicken-or-egg situation that'll have scholars arguing for years to come. Eventually the preponderance of evidence will come down on one side or the other ... or maybe simply to say both forms existed, depending on the specific locale. In some places, perhaps the temple came first, in others perhaps the temple was built later to celebrate the success of the agricultural effort. Either way, your suggestion of slave labor is likely accurate. Some things never change ;-)