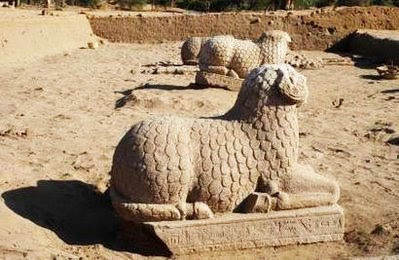 Inscriptions on the base of these newly discovered statues of rams at el-Hassa may hold the key to understanding the Meroitic language.


Archaeologists this week announced the discovery of three ancient statues in Sudan with inscriptions that could bring them closer to deciphering one of Africa's oldest languages. The stone rams ~ representing the god Amun ~ were carved during the Meroe empire, a period of kingly rule that lasted from about 300 BC to AD 450.

Vincent Rondot, director of the dig carried out by the French Section of Sudan's Directorate of Antiquities, told Reuters News that each statue displayed an inscription written in Meroitic script, the oldest written language in sub-Saharan Africa.

"It is one of the last antique languages that we still don't understand,” he said. “We can read it. We have no problem pronouncing the letters. But we can't understand it, apart from a few long words and the names of people."

He said experts were still trying to work out the meaning of the words by comparing them with broken remnants of similar royal dedications in the same script. The statues were found three weeks ago under a sand dune at the site of a temple to the god Amun, an all-powerful deity represented by the ram in Sudan. 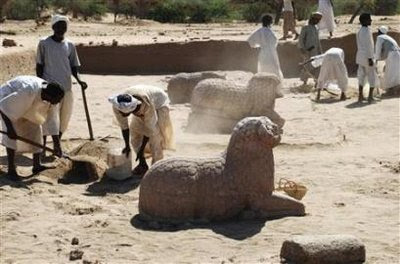 Workers clear soil away from the ram statues at the site of the Meroitic town in Sudan.
Posted by Gregory LeFever at 12:10 PM