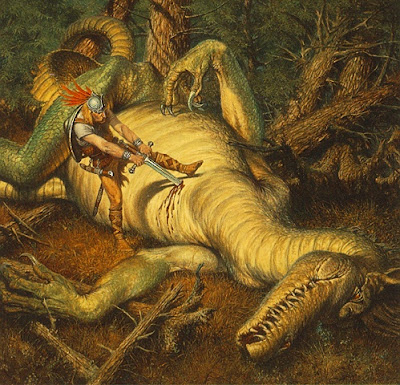 "In the myths but also in real social networks, you tend to have sub-communities who do not know anybody else," says Pádraig Mac Carron, co-author of the report. "In fiction, everyone tends to be completely connected with each other."
"In reality you also have popular people with hundreds of friends, then a few people with maybe 70, and a lot of people with a lot less friends," he adds. "But [in fiction] you get a lot of characters who have the same number of friends. Almost everyone that Harry Potter knows and interacts with also meets and interacts with Ron and Hermione, for example."
Click here for the article.
Small photo shows Page 1 of Beowulf.
Posted by Gregory LeFever at 1:39 PM 1 comment:

Stamp May Be Evidence of Biblical Samson 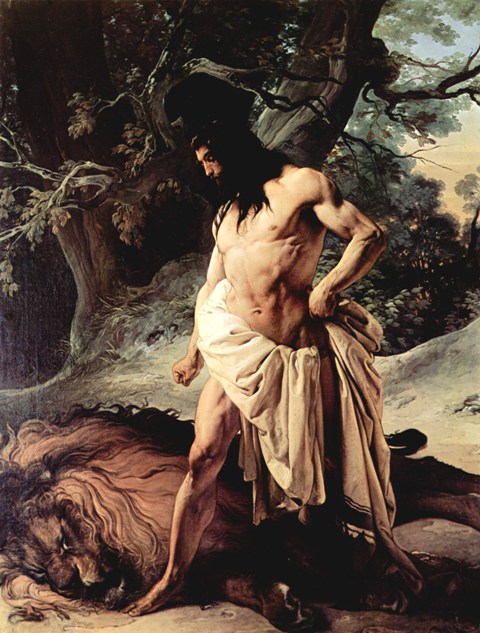 Samson and the Lion by Hayez

Archaeologists digging near Beit Shemesh near Jerusalem have uncovered a tiny seal that could possibly be the first evidence of Samson, the Biblical slayer of Philistines.

The seal appears to depict the Old Testament story of Samson, whose might was undone by his lust for the temptress Delilah, and his fight with a lion. It measures less than an inch in diameter, shows a large animal with a feline tail attacking a human figure.

According to the Daily Mail: 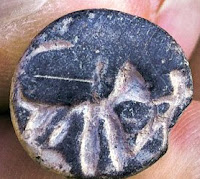 The seal was discovered at a level of excavation that dates it to roughly the 11th century BC, when Israelite tribes had moved into the area after Joshua's conquest of Canaan. It was a time when the Jews were led by ad hoc leaders known as judges, one of whom was Samson.

The location also indicates that the figure on the seal could represent Samson, according to Israeli archaeologists Professor Shlomo Bunimovitz and Dr Zvi Lederman.

Beit Shemesh is regularly mentioned in the Old Testament, most notably in chapter 6 of the book of Samuel I - the ruler of Israel immediately after Samson - as being the first city encountered by the ark of the covenant on its way back from Philistia after having been captured by the Philistines in battle.

A popular character in the Old Testament, Samson was said to have been given supernatural strength by God to allow him to overcome his enemies. He discovered his strength when he was accosted by a lion on his way to propose to a Philistine woman, killing it with his bare hands.

Click here for the article.
Smaller photo shows the small stamp archaeologists have unearthed.
Posted by Gregory LeFever at 11:18 AM No comments: