Scientists this week announced they may have found a lost continent off the coast of Brazil. Granite boulders dredged from the seafloor off the coast of South America two years ago could be remnants of a long-vanished continent, according to Roberto Ventura Santos, the geology director of Brazil's Geology Service.
According to National Geographic: 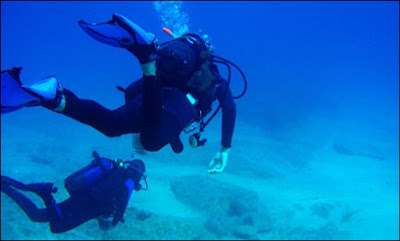 "This could be the Brazilian Atlantis," Santos said, adding that he was speaking metaphorically and not claiming to have found the legendary sunken world.

"Obviously, we don't expect to find a lost city in the middle of the Atlantic."

Santos speculated that the granite—a relatively low-density rock found in continental crust—belonged to a continent that was submerged when Africa and South America drifted apart and formed the Atlantic Ocean about 100 million years ago.

But Michael Wysession, an Earth and planetary scientist at Washington University in St. Louis, noted that granite can find its way onto the seafloor through other means.
"There are pieces of granite in the middle of the seafloor that date to about 800 million years ago when we had a snowball earth scenario and there were large pieces of rock embedded in ice rafts"—mobile glaciers, essentially—"all over the ocean," explained Wysession.


Image: Divers near where the granite was found.
Click here for the article.
Posted by Gregory LeFever at 7:39 PM No comments: