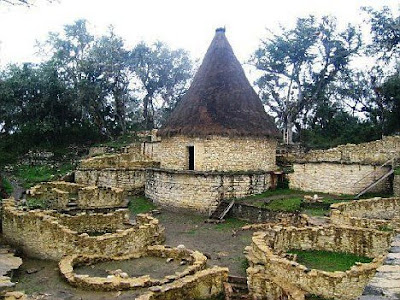 An ancient Chachapoyas village near where the lost city was discovered.

An overgrown, fortified citadel discovered in the Amazon rainforest may be linked to the legendary Cloud People of Peru, an ancient, white-skinned civilization that fell victim to war and disease in the 16th century.

The tribe had white skin and blonde hair, features that intrigue historians because there is no known European ancestry in the region, where inhabitants are normally much darker skinned.

The citadel is tucked away in one of the most far-flung areas of the Amazon. It sits at the edge of a chasm that the tribe may have used as a lookout to spy on enemies. The main encampment is made up of circular stone houses overgrown by jungle over 12 acres, according to archaeologist Benedict Goicochea Perez.

The Cloud People once commanded a vast kingdom stretching across the Andes to the fringes of Peru's northern Amazon jungle, before the Incas conquered it. The cloud reference is to the rainforests filled with cloud-like mist.

The people are believed to have sided with the Spanish-colonialists to defeat the Incas, but were killed by epidemics of European diseases, such as measles and smallpox. Much of their way of life, dating back to the ninth century, was also destroyed through pillaging that left little for archaeologists to examine.

Until recently, much of what was known about the lost civilization was from Inca legends, according to the London Daily Mail. Even the name they called themselves is unknown. The term Chachapoyas, or “Cloud People,” was given to them by the Incas.

Chachapoyas chronicler Pedro Cieza de Leon wrote of the tribe: “They are the whitest and most handsome of all the people that I have seen, and their wives were so beautiful that because of their gentleness, many of them deserved to be the Incas' wives and to also be taken to the Sun Temple. The women and their husbands always dressed in woolen clothes.” 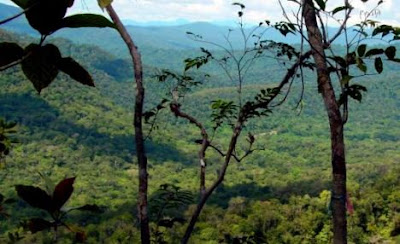 A stretch of Amazonian rainforest in northern Peru, once the territory of the Cloud People.

Posted by Gregory LeFever at 11:12 AM

very elegant blog , and i will be glad to exchange links with u , waiting ur opinion...

Thanks for your interest, Salah. I haven't started a link list on this blog and don't know if I will. Your blog on Ancient Egypt is off to a good start!

Chachapoyas civilisation is from area in Peru that is very rich with many sites and archeological discoveries.Peruvian archeologist Walter Alva estimates that there are approximately 200,000 unregistered monument and archeological sites in Peru dating from the last 4 millenia."All of them"he believes "including the farthest or most overgrown,have been partially affected by looting"How can Peru effectively police a wilderness frontier nearly 1000 miles long?The expansion of world tourisem is afecting this country and is a real threat to the archeology.Sometimes the archeology has the luck of finding treasures in the leftovers left after the tombraiders went through the site.Here is a good story that i have came across reading a magazine-"The SAA Archeological" In 1997 in the area of Chachapoya cliff tombs,catle herders discovered six mortuary chambers.They ransacked them completly in their naive belives that their will be preciouss jevelery and treasures hidden in the fabrics.In their anger and rage the barbarians hacked some of the mummies with machetes frustrated that there was not anything of value to plunder.Here is the clincher of this story.The barbarians left a real treasure trove- extraordinary textiles,pyroengraved gourds,Inca quipos and many other objects.FYI- Inca quipos is a record keeping system a method involving knots tied in rope that was brought to perfection by the Incas.Archeologists of Centro Malqui succeded in recovering and conserving the artifacts and now they are displayed in new museum and reserch center in Lymebamba.So sometimes there is a happy ending and the invaluable discoveries end where they always belong in a musuums where they can be studied and protect for the future generations.