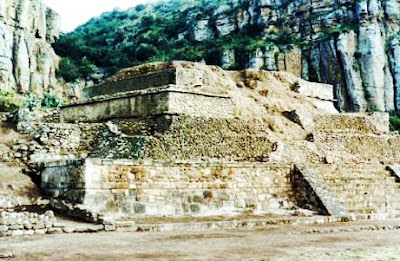 Archaeologists continue to debate the origin of the mysterious Huapalcalco pyramid in the central Mexican state of Hildalgo.


Sculptures recently found in central Mexico point to a previously unknown culture that likely built a mysterious pyramid in the valley of Tulancingo, a major canyon that drops off into Mexico's Gulf Coast.

Most of the 41 artifacts "do not fit into any of the known cultures of the Valley of Tulancingo, or the highlands of central Mexico," said Carlos Hernández, an archaeologist at Mexico's National Institute of Anthropology and History in the central state of Hidalgo.

Many of the figures are depicted in a sitting position, with their hands placed on their knees. Some have headdresses or conical hats with snakes at the base, which could represent Ehécatl-Quetzalcóatl, the Aztec god of the wind. One figure shows a man emerging from the jaws of a jaguar. They are also made of flat stucco—a combination of fine sand, lime, and water—and painted blue or green to the give the appearance of jade.

All of the artifacts date to the Epiclassic period between A.D. 600 to 900.

Some of the artifacts were also found near the mysterious Huapalcalco pyramid in Hidalgo, whose origin has been a source of debate among archaeologists. Its proportions, along with smaller structures that were painted black and white, do not correspond to the Toltec or Teotihuacan cultures of the same area and time period.

The Teotihuacan people, who lived from 400 B.C. to A.D. 700, constructed one of the largest pyramid complexes in the pre-Hispanic Americas, which refers to cultures that lived on the continent before the Spanish conquest of the Western Hemipshere.

The Toltecs, who came afterward, were made up of several groups of South Americans that together formed an empire famous for its artists and builders in the Teotihuacan capital of Tula from A.D. 900 until the 1100s.

Posted by Gregory LeFever at 4:59 PM