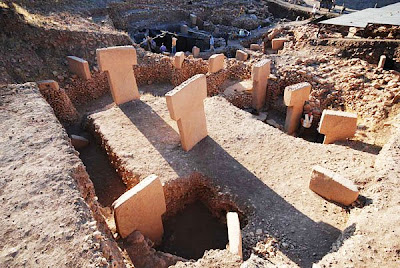 Megaliths at the Göbekli Tepe site probably once supported roofs.
It’s sometimes called the "Turkish Stonehenge,” but archaeologists now believe the Neolithic temple at Göbekli Tepe in southeastern Turkey dates to as early as 10,000 BC, or about 7,000 years earlier than its more famous British counterpart.
According to Archaeology magazine, Göbekli Tepe is the oldest manmade place of worship yet discovered. Its most striking features are dozens of megalithic pillars placed in circles. The megaliths, which may have once supported roofs, are about nine feet tall.

Göbekli Tepe's circles range from 30 to 100 feet in diameter and are surrounded by rectangular stone walls about six feet high. Many of the pillars are carved with elaborate animal figure reliefs, including bulls, foxes, cranes, lions, ducks, scorpions, ants, spiders, and snakes. Other freestanding sculptures depicting the animals have also been found within the circles. During the most recent excavation, archaeologists uncovered a statue of a human, as well as sculptures of a vulture's head and a boar.

The oldest structures belong to what archaeologists call the early Pre-Pottery Neolithic A period, which ended around 9000 B.C. Strangely enough, the later remains, which date to the Pre-Pottery Neolithic B period, or about 8000 B.C., are less elaborate. The earliest levels contain most of the T-shaped pillars and animal sculptures.

Archaeologist Klaus Schmidt and his colleagues estimate that at least 500 people were required to hew the 10- to 50-ton stone pillars from local quarries, move them from as far as a quarter-mile away, and erect them, a process that would have required a level of organization previously not believed of Stone Age people.

Before the discovery of Göbekli Tepe, archaeologists believed societies in the early Neolithic were organized into small bands of hunter-gatherers and that the first complex religious practices were developed by groups that had already mastered agriculture. They thought that the earliest monumental architecture was possible only after agriculture provided Neolithic people with food surpluses, freeing them from a constant focus on day-to-day survival.

A site of unbelievable artistry and intricate detail, Göbekli Tepe has turned this theory on its head, according to Archaeology magazine. 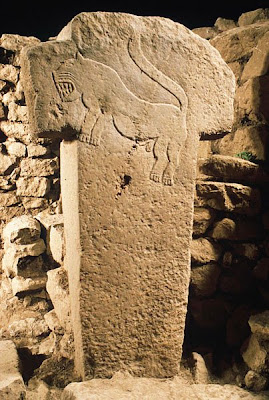 Most of the carvings show dangerous animals, such as this lion. 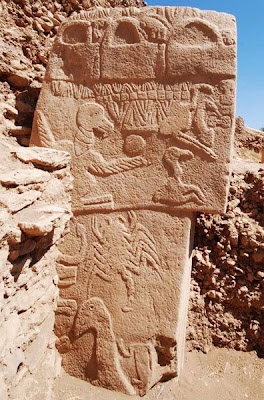 Carvings on this pillar depict a crocodile-like creature and vultures flying above a scorpion. 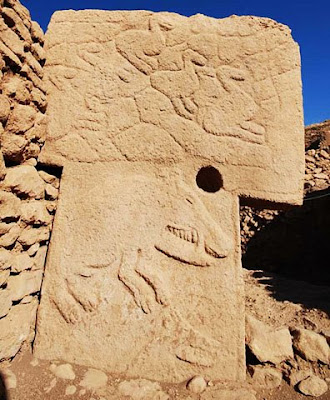 It makes me think of Graham Hancock's book, Supernatural and the paleolithic cave drawings. Ayahuasca anyone?

Gobkli Tepe was located originally in a survey from the American archaeologist Peter Benedict in 1964.Excavations have been conducted since 1994 by Deutshes Arhaelodishe Institute/Istanbul branch/and local Saniflora museum.The word Gobkli Tepe translates for "Hill with a belly".In the same province of Turkey-Sanliurfa there is another as significant site as Gobkl Tepe-Nevali Gori witch was early Neolithic settlement on the middle Euphrates river.The site was under the rescue excavations during the erection of the "Ataturk dam"/Karababa/.Third largest in Turkey and covering an area of 315 sq.mi.Under the guidance of proff.H.Hauptmann/university of Heidelberg/were discovered many early Neolithic buildings.There were many limestone carved statues and small clay sculptures/few inches tall/ interpreted as votive offerings.Life -size human head with a snake or sikha-like tuft and statue of bird was unearthed too. .It has being determined that the free-standing anthropomorphic statues belong to the earliest known life-size statues in Human history!!. Unfortunately the dammed waters of Euphrates covered the whole area and those wonderful discoveries.Someone might draw parallel with the construction of Aswan Dam in Egypt'1960-64/and the hastily rescue operation that underwent under UNESCO in order to save some of the temples on the banks of Nile river .Or the recent "behemoth irrigation"project of Peoples republic of China-"Tree Gorge ".Archaeology is a slow and painstakingly process , trying to peel of layer after layer of centuries of historic strata to reveal the diamond in the rough,and on the other hand is our modern hectic life with dead-lines and no time to wait.As usual the loser is the artifacts.But let go back to the article.Besides unparalleled in the chronology of human development Gobkli Tepe and Nevali Gori are very important in something else.The scholars speculate that the sites were built from hunter-gathering societies.Those societies were depend on gathering edible plants and scavenging dead animals .This was the only subsistence strategy for the human beings for more than 2 million years until the end of Mesolithic period.They were non-hierarchical,egalitarian societies.Common glue was kinship and band membership.Gobkli Tepe was erected by those societies in the 10 millenium BC/circa 11,500 ago/.The scholars were attributing those cult complexes only to the sedentary farming communities.With excavating the site this theory has changed.This is one of the great contribution of Gobkl Tepe.The other very important fact is that the Neolithic Revolution with it grain cultivation begun in this area.Evidence from DNA-finger-printing suggests that eikorn wheat was domesticated in this area /Karacadag in Southeast Turkey .Eikorn wheat/Triticum boeticum/ or from German Eikorn literally "one grain" was discovered in the archaeological sites."Max Plank Society for Advancement of Science/Cologne-Germany/ has discovered that the genetically common ancestor of 68 contemporary types of cereal grows as a wild plant on the slopes of Mount Karacadag.Is it not amazing how the modern science can trace our staple food from the supermarket shelves way back to our ancestors?