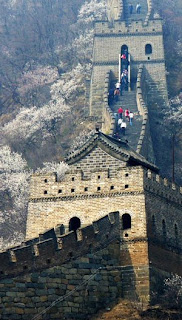 Archeologists have determined kilns in North China's Hebei province were dedicated to producing bricks for the Great Wall. The site is the closest brick production base to the Wall discovered so far.

The 600-year-old site is located in the coastal city of Qinhuangdao on farmland about 110 yards from a local section of the Wall at Chengziyu.

Archaeologist have unearthed more than forty brick kilns, all built in the Ming Dynasty, during the same period.

The Great Wall was first built by order of Emperor Qinshihuang over two thousand years ago. Its most recent large-scale reinforcement came in the early Ming Dynasty, when the empire's northern frontiers were seriously threatened.

Posted by Gregory LeFever at 10:23 AM