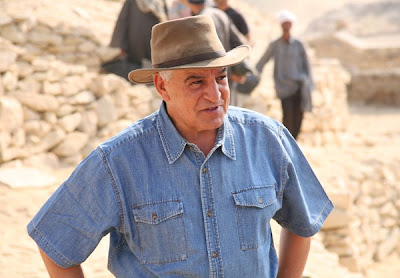 One name more than any other has cropped up in Ancient Tides ~ that of Zahi Hawass, head of Egypt’s antiquities bureau. Due to his high profile in the usually modest profession of archaeology, it’s no surprise that some controversy surrounds the man.

Earlier this week, the New York Times ran a feature article about Hawass, including these excerpts:

In the seven years since he was named general secretary of the Supreme Council of Antiquities, Dr. Hawass has been in perpetual motion. He personally announces every new discovery, was the force behind plans to construct 19 new museums, approved the restoration of nine synagogues in Cairo and has contributed to countless books, documentaries, magazine and newspaper articles all promoting Egyptian antiquities — and, of course, himself.

There are scientists who say he is too concerned with self-promotion and is often loose with facts. There are Egyptian antiquities workers who complain that he takes credit for their accomplishments. But his penchant for drama and his virtual monopoly over Egypt’s unrivaled ancient riches have earned him an international following and helped Egypt sell itself to tourists at a time when tourism dollars are increasingly scarce.

“Whether we like it or not, he is a star, and he lives the life of a star,” said Mahmoud Ibrahim Hussein, chairman of the antiquities department at Cairo University. “When he goes to a place, people gather around him to talk to him. Many professors give lectures; but people pay more to hear Zahi speak.”

Posted by Gregory LeFever at 1:59 PM

Today Egypt is home to almost 90% Islam believers and tourists are treated to some of the most magnificent Mosques in the whole world. Additionally since Egypt was for a time ruled by Christianity, the remainder of the citizens here are Coptic Christians who are also known for their lavishly designed churches and temples. Get to experience both the Christian and Islam faith by joining tours such as the Cairo Religious Tours where tourists can visit different sites of religious value in Cairo.