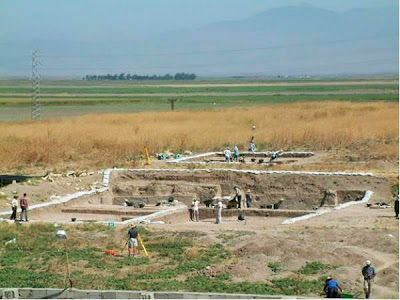 The ongoing dig at the Tayinat Citadel reveals the noteworthy temple.

Discovery of a well-preserved temple in Turkey ~ constructed during the time of King Solomon around the 10th Century BC ~ casts doubt on the view that the transition from the Late Bronze Age to the Early Iron Age was violent, sudden and culturally disruptive.

Ancient sources such as the Homeric epics and the Hebrew Bible depict an era of widespread famine, ethnic conflict and population movement, including migrations of Philistines and the Israelites, also called the Sea Peoples. According to ScienceDaily:

This is thought to have precipitated a prolonged Dark Age marked by cultural decline and ethnic strife during the early centuries of the Iron Age. But recent discoveries ~ including the Tayinat excavations ~ have revealed that some ruling dynasties survived the collapse of the great Bronze Age powers.

"Our ongoing excavations have not only begun to uncover extensive remains from this Dark Age, but the emerging archaeological picture suggests that during this period Tayinat was the capital of a powerful kingdom, the ‘Land of Palastin’," says Timothy Harrison, professor of Near Eastern Archaeology at the University of Toronto and the director of the project. "Intriguingly, the early Iron Age settlement at Tayinat shows evidence of strong cultural connections, if not the direct presence of foreign settlers, from the Aegean world, the traditional homeland of the Sea Peoples."

The temple’s inner sanctuary ~ also know as its 'holy of holies' ~ will be the focus of the 2009 field season which begins on July 1.

Posted by Gregory LeFever at 4:54 PM

There was no "King Solomon" in the 10th century B.C.

What gibberish: it all comes from stolen Egyptian Pharaoh's history.

Where is there ANY proof of any "Kingdom of Israel" in archaeology? WHERE?
There is none. The "Israelites" were the mountain Caananites.

And, DNA proof of Palestinians and "Isrealis" being related prove it.

Your comment is very interesting because, as you say, as far as I know the archaeological proof of Solomon and any kingdom ~ in the usual sense ~ is lacking.

Of course, to toss such a chunk of the Old Testament into the bin of pure myth/legend would upset a lot of powerful people.

I'd like to know more about the DNA testing you mention.