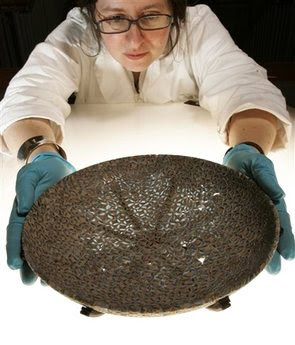 The bowl was pieced together from fragments found at the site.

Calling it a “miracle of preservation,” archaeologists have unearthed a Roman glass bowl in an ancient cemetery beyond the walls of the old city of London. The millefiori ~ meaning “a thousand flowers” ~ dish is believed to date from around the 2nd to 3rd century AD.

"For it to have survived intact is amazing,” Jenny Hall, curator of the Roman collection at the Museum of London, told Reuters News. “In fact, it is unprecedented in the western Roman world. We are still checking out whether there are similar examples surviving in the eastern part of the empire, in ancient Alexandria for example, but it's the only one in the West.”

The dish was found about nine feet deep in the ancient cemetery in Aldgate, east London, just beyond the old city walls. Romans were required by law to bury their dead outside the city gates.

Archaeologists said the dish was colored bright red when it was first pulled from the earth. The vermilion color has slowly disappeared since excavation as the water-saturated glass dried out. The moisture had preserved the original coloring, and some of the pigment is still distinguishable around the rim.

Posted by Gregory LeFever at 11:01 AM