Ancient Israel May Have Had A Woman King 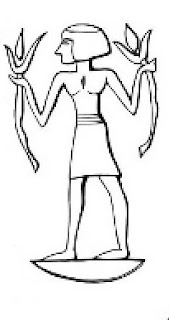 Archaeologists at Tel Beth-Shemesh have uncovered possible evidence of a mysterious female ruler of Canaan, or ancient Israel. The finding appears on an unusual ceramic plaque of a goddess in female dress, suggesting that a mighty female “king” may have ruled the city. If true, they say, the plaque would depict the only known female ruler of the region.

The plaque itself depicts a figure dressed as royal male figures and deities once appeared in Egyptian and Canaanite art. The figure’s hairstyle, though, is womanly and its bent arms are holding lotus flowers ~ attributes given to women.

The plaque, art historians suggest, may be an artistic representation of the “Mistress of the Lionesses,” a female Canaanite ruler known to have sent distress letters to the Pharaoh in Egypt reporting unrest and destruction in her kingdom.

Click here for the Science Daily article.
Posted by Gregory LeFever at 7:58 AM

The article's headline should correctly read: "Ancient Canaan may Have had A Woman King", and whoever put Israel there needs to explain where the word "Israel" was ever linked to this find.

And yes, ancient Canaan did indeed have a "Woman King", her name was Hetshepsut. Egypt ruled this land. The female Pharaoh the bible called "Deborah, the female Judge." Lapidoth, the red-headed female Pharoah.

You are correct. It's sloppy labeling ~ of which I too have been guilty ~ to consider "Canaan" and "Israel" as synonymous. The actual article to which I linked is more factual and correct.

I had not heard of the Hetshepsut/Deborah connection until your comments, which I appreciate.