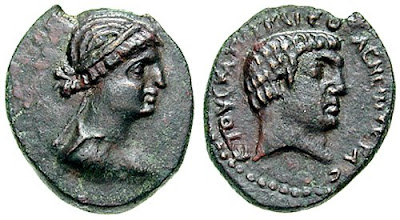 An ancient coin displaying the likenesses of Cleopatra and Mark Anthony.

Archaeologists in Egypt next week begin excavating three sites in search of the tombs of the doomed lovers, Cleopatra and Mark Anthony.

The sites were identified last month during a radar survey of the temple of Taposiris Magna. It is located on Lake Mariut ~ now known as Abusir ~ near the coastal city of Alexandria, and was built during the reign of King Ptolemy II (282-246 BC.)

Cleopatra, then queen of Egypt, and her Roman general lover, Mark Anthony, committed suicide after being defeated in the battle of Actium in 31 BC.

Excavators found a number of deep shafts inside the temple, three of which were possibly used for burials. Leaders of the excavation believe Cleopatra and Mark Anthony could have been buried in a deep shaft similar those already found.

Last year, archaeologists at the site also unearthed a bronze statue of the goddess Aphrodite, the alabaster head of a Queen Cleopatra statue, a mask believed to belong to Mark Anthony and a headless statue from the Ptolemaic era at the excavation site.

Posted by Gregory LeFever at 2:55 PM