Tomb May Have Held Ramses' Granddaughter 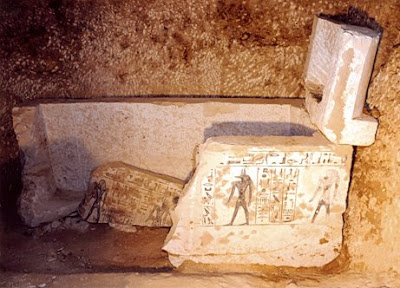 A 3,000-year-old tomb uncovered recently has been identified as belonging to a woman named Isisnofret, possibly the granddaughter of Pharaoh Ramses II, who reigned during the 13th century B.C.

The tomb was found in a burial complex long buried by sand and rubble on a rocky outcrop on the outskirts the ancient royal burial city of Saqqara. The complex includes the base of a pyramid, a monumental gateway, a colonnaded courtyard, and an antechamber with three cult chapels.

Though Isisnofret's chapels are in ruins, partly due to looting, archaeologists have found fragments decorated with hieroglyphics. In general, cult chapels were painted with scenes of daily life and offerings—in case the family failed to provide the real thing.

Inside Isisnofret's tomb building, a limestone sarcophagus was found holding three skeletons—degraded mummies whose ages and sexes have yet to be determined.

Archaeologists at the site are unsure why the sarcophagus holds three bodies, or even what the original state was. The sarcophagus is missing its internal, wooden coffin—perhaps stolen during the ancient pillaging that seems to have stripped the tomb of funerary objects.

Posted by Gregory LeFever at 4:12 PM