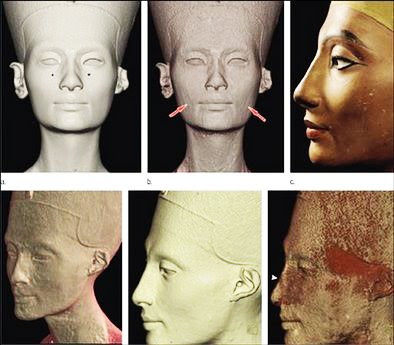 Photos show slight differences in the two faces, including creases at the corners of the mouth and a slight bump on the nose, as found with the CT scan. Photo below shows the Nefertiti bust on display in Germany.


German researchers have determined that a well-known bust of Nefertiti actually has two faces, one a layer deeper than the visible face.

Alexander Huppertz, director of the Imaging Science Institute at Berlin's Charite hospital and medical school, headed up a team that discovered a detailed stone carving that differs from the external stucco face when they performed a computed tomography (CT) scan on the bust. "Until we did this scan, how deep the stucco was and whether a second face was underneath it was unknown," he said. "The hypothesis was that the stone underneath was just a support." 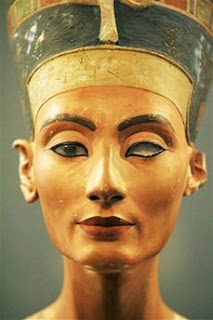 The differences between the faces, though slight — creases at the corners of the mouth, a bump on the nose of the stone version — suggest to Huppertz that someone expressly ordered the adjustments between stone and stucco when royal sculptors immortalized the wife of Pharaoh Akhenaten 3,300 years ago.

John H. Taylor, curator for Ancient Egypt and Sudan at the British Museum in London, told the Associated Press the scan raises interesting questions about why the features were adjusted, but that answers will probably remain elusive.
"One could deduce that the final version was considered in some way more acceptable than the 'hidden' one, though caution is needed in attempting to explain the significance of these changes," he said.