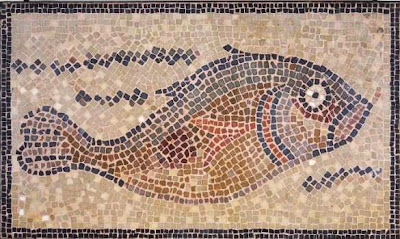 “The eating habits of Rome’s early Christians are more complex than has traditionally been assumed,” writes Leonard Rutgers and his colleagues in The Journal of Archaeological Science. They analyzed 22 skeletons found in the Catacombs of St. Callixtus on the Appian Way, an area utilized in the 3rd to 5th centuries AD, although some of the skeletons were radiocarbon-dated to the 2nd century, according to the Times of London.

“While distancing themselves from Jewish food taboos and generally avoiding meat derived from pagan sacrifices, the early Christians are normally hypothesized to have eaten the same food as their non-Christian Roman contemporaries,” the team says. “Within the larger context of what is currently known about Roman dietary habits, the inclusion of freshwater fish therefore comes as unexpected and raises questions about the social origins of Christianity as well.”

“When Romans ate fish at all, they are normally believed to have consumed sea fish. Freshwater fish has not been considered as an essential ingredient in the classical Roman diet.” In AD301, the Emperor Diocletian’s Edict on Prices tried to fix the cost of freshwater fish at around a half to a third of its marine equivalent, so that even the poor could eat it. Roman fish probably came from the Tiber, and would have been a free or cheap source of protein.

Rutgers and his colleagues conclude “that at least the small selection of early Christians analyzed were all simple folk, suggesting that the inclusion of freshwater fish is indicative of a relative lack of wealth rather than of religiously motivated ascetic behavior."

Click here for the complete Times of London article.

Posted by Gregory LeFever at 2:00 AM