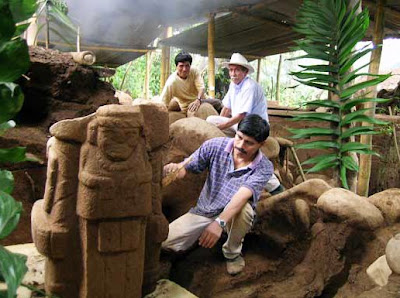 Two mutilated Mayan Olmec sculptures found in June and August in Guatemala are now believed to have been pieces of a single, enigmatic figure, carved sometime before 200 BC. According an article in the Guatemala Times:

This sculpture presents an imposing character, decorated with insignias of power with certain Olmec characteristics such as the sign U on the sash. Something very surprising is that this character is carrying a small human figure on his back. This small human figure has the position of his arms on his chest and hands folded down, and very straight legs, similar to those infants who are often found in the lap of the Olmec jade figures. These infant figures have been interpreted by some archaeologists as divine beings or ancestors. The quality of the volume and complete form of the sculpture conveys the formal concepts of Olmec art sculpture; however, this sculpture seems strange.

The character is standing on the capital of a column of rectangular sides. The capital was carved in the shape of the head of a monster bat or monster of the earth (Cauac). This form of representation of the monster Cauac with Mayan features is found a few decades later in other classic Maya cities, as in Quirigua and Copan. In Quirigua and Copan the steles have the monster Cauac on the base on which the rulers are standing.
It is important to note that the small figure on the back of the standing character is literally joined by an extended cloth or skirt to the head of the bat. It is evident that the intention of the sculptor of this figure was to communicate the importance of the union of the carrier of the ancestor with the monster of the earth.

Among the questions for which archaeologists are seeking answers:
Archaeologists and specialists in Mayan culture are calling the sculpture of the Carrier of the Ancestor of Tak'alik Ab'aj an unprecedented finding.
Click here for the article in the Guatemala Times. 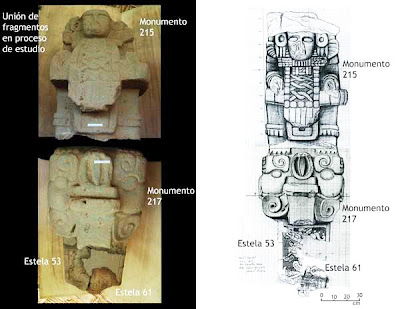 Drawing indicates how the two pieces fit together to form a single sculpture, carved sometime before 200 BC.
Posted by Gregory LeFever at 6:17 PM

Fascinating find! It would seem to be an older piece re-displayed on the pedestal. Is the bat associated with the place it was found, like the leaf-nosed bat and Copan?

Perhaps this is the predecessor of the images of the ancestors appearing through the vision serpent's open mouth, confering their apparent approval on the current leader.

Check out my blog at misfitsandheroes.wordpress.com

Thanks for your comment, Kathleen. I just visited your misfitsandheroes blog and know I'll be spending much more time there. Great topics, well written! I also want to explore more about your book.

I'm honored that you stopped by, Kathleen, and were compelled to leave a comment. Thank you.