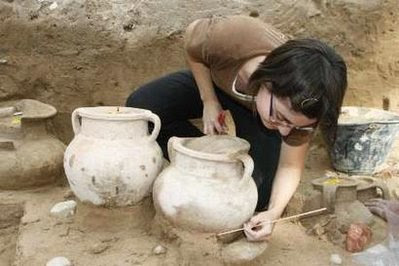 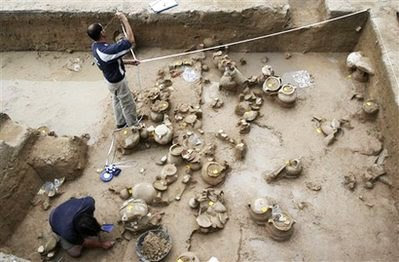 Documenting locations of some of the 100 jugs unearthed so far.
Archaeologists in southern Lebanon have unearthed more than 100 Phoenician pottery jars dating back 2,900 years. The jars were used to hold human remains following cremation. "The big jars are like individual tombs. The smaller jars are left empty, but symbolically represent that a soul is stored in them," Ali Badawi, the archaeologist in charge in Tire, told Reuters.

Lebanese and Spanish archaeologists discovered the jars at a Phoenician site in the southern coastal city of Tire. Phoenicians are known to have thrived from 1500 B.C. to 300 B.C and were also headquartered in the coastal area of present-day Syria. The Phoenicians' earliest cities included Byblos, Tire and Sidon on Lebanon's coast. From Tire, Phoenicians are thought to have expanded into other colonies on the Mediterranean coast.

"These discoveries help researchers who work on past Phoenician colonies in Spain, Italy and Tunisia, to pin down a large number of their habits and traditions," said Maria Eugenia Aubet, who leads the Spanish archaeological team.

"Especially since there are few studies of the Phoenicians in their motherland of Lebanon," Aubet said, adding that the remains proved that the Phoenicians had a vision for life after death.

Posted by Gregory LeFever at 10:46 AM