Outline of the Stone Age rectangular farmhouse.
Six-thousand-year-old crockery and two wood-fired ovens have been unearthed in the buried ruins of a prehistoric farmhouse in northern Greece. A Greek Culture Ministry statement released today said the discovery "provides invaluable, unique information" on late Neolithic domestic architecture and household organization.
"This is a very rare case where the remains have stayed undisturbed by farming or other external intervention for about 6,000 years," the statement said. "The household goods are in excellent condition."
The rectangular building covers some 624 square feet. It was discovered when workmen were laying water pipes earlier this year at the village of Sosandra, about 360 miles north of Athens. Archaeologists excavated the site between March and July, finding a large number of clay vessels for cooking and eating, stone tools, mills for grinding cereals and two ovens.
The house was separated into three rooms and had walls made of branches and reeds covered with clay, supported by strong wooden posts. The building was destroyed by fire, which baked the clay, preserving impressions of the wooden building elements, as well as the post holes.
Archaeologists believe the inhabitants managed to escape the fire. "They left behind the large stone tools which would have been difficult to move away," the ministry statement said. 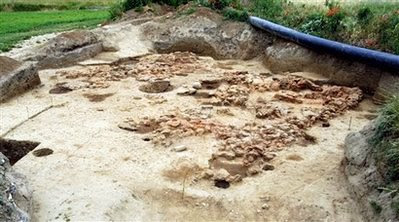 Holes for posts that supported the house's walls and roof are still visible in the ruins because a house fire baked the clay around the holes. 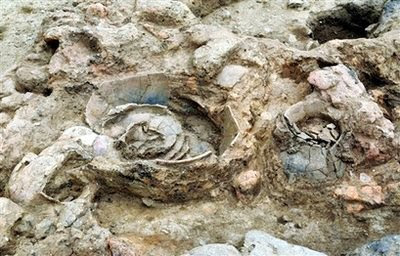 Here is some of the 6000-year-old ceramic pottery archaeologists recovered from the ruins.
Posted by Gregory LeFever at 12:01 AM