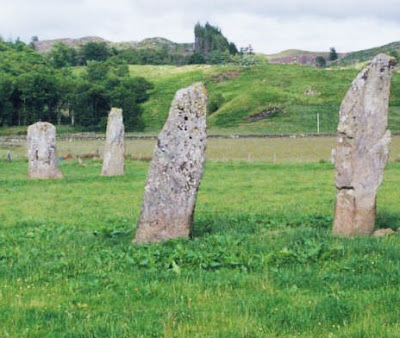 Archaeologists are having trouble accounting for a mysterious millennium-long absence of activity at an ancient Scots religious site.

Kilmartin Glen is one of the most important Neolithic sites in Europe, predating both the Pyramids and Stonehenge. Hunter-gatherer tribes practiced sacred rites there from 3700 BC or even earlier, to about 1100 BC. It contains at least 350 ancient monuments, including burial cairns, rock carvings and standing stones in addition to the spectacular remains of the fortress at Dunadd, capital of the kingdom of Dalriada.

But archaeologists have identified a period of almost 1,000 years in which no monuments were erected and the population virtually disappeared. There is some speculation that a dramatic climate change may have affected the area’s inhabitants. 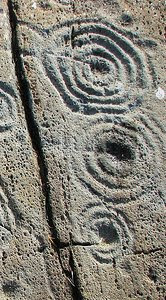 “Kilmartin Glen is one of the richest archaeological areas in Scotland, with a very high concentration of ritual sites.” Alison Sheridan, head of early prehistory at the National Museum of Scotland, told the Times of London this week. “It was a place for ceremony, for burying people, and observing the movements of the Sun and the Moon.”

“We are not too certain what happened between 1100 BC and 200 BC,” Sheridan told the Times. “A hoard of swords has been found and a few artifacts buried as gifts to the gods in the late Bronze Age between 1000 and 750 BC. But there are few structures and no settlements. When you start getting settlements again around 200BC they are in little fortified settlements.

“It was no longer a happy valley, and people raided each other,” she said.

Click here for the London Times Online article.
Photo above shows Neolithic carvings at Kilmartin Glen.
Posted by Gregory LeFever at 11:50 AM