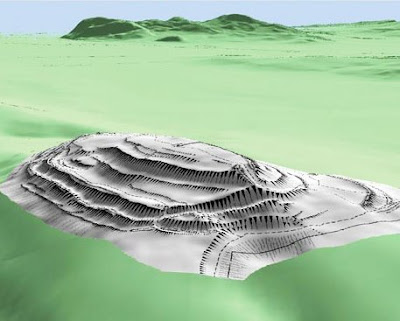 The digital re-creation of the fort, minus the overgrowth. 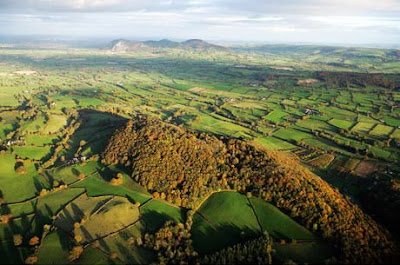 The fortress today, hidden beneath centuries of trees and undergrowth.

Gaer Fawr, a 2,900-year-old structure, has been consumed by woods and foliage. "Because Gaer Fawr is densely wooded, it's been little understood in the past," said Royal Commission archaeologist Toby Driver."Our new survey has shown what a very impressive and advanced building it was. This was a very bold architectural statement by Iron Age people."

The survey undertaken by the Royal Commission on the Ancient and Historical Monuments of Wales. It involved thousands of measurements taken in 2007, which were used build a digital terrain model of the 21-acre site. Measurements were made manually using lasers beamed to handheld posts, each bearing a reflector, Driver said.

"The thought behind the survey was that if we could map the contours underneath the woods, we could then strip the trees off and then see what the fort looked like in the landscape," he added.

The results show the oval-shaped stronghold was defended by five tiers of stone-faced earthen ramparts, each measuring up to 26 feet in height.

Click here for the National Geographic article.
Posted by Gregory LeFever at 8:46 PM