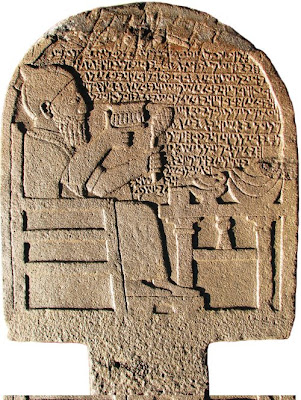 The stone slab with the inscription saying the cremated man's soul continued to live in the stone itself.

Archaeologists in southeastern Turkey have discovered an Iron Age chiseled stone slab that provides the first written evidence in the region that people believed the soul was separate from the body.
Part of an expedition sponsored by the University of Chicago, the archaeologists found the 800-pound basalt stele ~ 3 feet tall and 2 feet wide ~ at Zincirli, site of the ancient city of Sam’al. Once the capital of a prosperous kingdom, it is now one of the most important Iron Age sites under excavation.
The stele is the first of its kind to be found intact in its original location, enabling scholars to learn about funerary customs and life in the eighth century BC. At the time, vast empires emerged in the ancient Middle East, and cultures such as the Israelites and Phoenicians became part of a vibrant mix.
Cremation Was Common
The man featured on the stele was probably cremated, a practice that Jewish and other cultures shun because of a belief in the unity of body and soul. According to the inscription, the soul of the deceased resided in the stele. It was discovered last summer in a small room that had been converted into a mortuary shrine for the royal official Kuttamuwa, self-described in the inscription as a “servant” of King Panamuwa of the eighth century BC. The inscription reads in part:

“I, Kuttamuwa, servant of Panamuwa, am the one who oversaw the production of this stele for myself while still living. I placed it in an eternal chamber(?) and established a feast at this chamber(?): a bull for [the storm-god] Hadad, ... a ram for [the sun-god] Shamash, ... and a ram for my soul that is in this stele. …”

It was written in a script derived from the Phoenician alphabet and in a local West Semitic dialect similar to Aramaic and Hebrew.
The finding sheds a striking new light on Iron Age beliefs about the afterlife. In this case, it was the belief that the enduring identity or “soul” of the deceased inhabited the monument on which his image was carved and on which his final words were recorded.
Click here for the complete University of Chicago new release.

Posted by Gregory LeFever at 6:04 PM

To cremate or not to cremate, the eternal question for the good of the soul. ;)