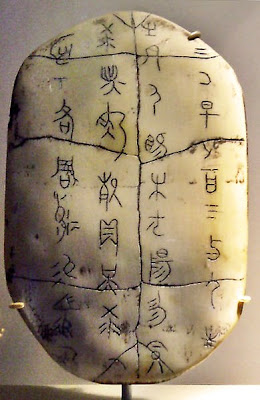 The find was made at a cluster of tombs in Qishan county that date back to the Western Zhou Dynasty in the 11th Century BC. Among the finds is the character for "king,” which could help archaeologists learn more about the lives of the Zhou kings and the region in which they lived.

Zhou Chunmao, a researcher with the Shaanxi archaeology research institute, told China Daily this week that the discovery of the new oracle bone scripts has great significance for the understanding of the formation of the Western Zhou dynasty and the structure of society at that time.

Since the first oracle bones were found in 1898, Chinese archaeologists have unearthed more than 100,000 pieces of bone and tortoiseshell inscribed with characters. Oracle bone script is the earliest recorded form of Chinese writing, dating back to the Bronze Age.

The oracle bones ~ also known as Dragon bones ~ were made of turtle shell, burned and inscribed in a process of divination known as pyromancy. Due to the fundamental importance of fire in society, it is quite likely that this was one of the earliest forms of divination.

Click here for the article in China Daily.
Posted by Gregory LeFever at 8:06 AM

It is very interesting for me to read this post. Thanks for it. I like such themes and everything connected to them. I definitely want to read a bit more on that blog soon.