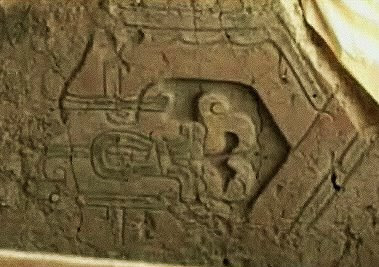 The carved image of the spider god has a spider's neck and head, the mouth of a large cat, and a bird's beak.
Recent investigation of a 3,000-year-old temple on Peru’s north coast is revealing more information about the spider god popular in ancient Cupisnique culture, which thrived from roughly 1500 to 1000 BC.

The adobe temple was found this summer and called Collud. It is the third Cupisnique temple discovered in the area in recent years. The spider-god image appears often in other sites created during Peru's Early Formative Period, 1200 to 400 BC, including the Garagay temple in Lima and the Limón Carro site in northern Peru.

The Collud image combines a spider's neck and head, the mouth of a large cat, and a bird's beak, according to archaeologist Ignacio Alva. The spider is also carved with lines radiating from its neck, creating a web-like appearance. The web symbolizes hunting nets, a sign of human progress and prosperity, Alva said.

Richard Burger, an expert on the Chavin culture that followed the Cupisnique, first identified the spider deity in stone bowls found at the Limón Carro site. The importance of spiders owed partly to their connection with life-giving rain, he said.

"They were associated with divination of rainfall because spiders come out before rain," said Burger, an archaeologist at Yale University who was not involved with the Lambayeque excavation.

The spider deity was also associated with textiles, hunting, war, and power. Burger said, "There is an image of spider deities holding nets filled with decapitated human heads, so there was an analogy with successful warriors and claims of power."