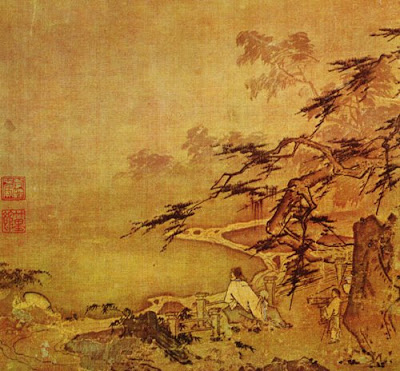 The work rests on climate data preserved in a 118-millimeter-long stalagmite found in Wanxiang Cave in China’s Gansu Province. It was formed over 1,810 years, with stone at its base dates from190 AD, and stone at its tip from 2003, the year the stalagmite was collected. By measuring amounts of the elements uranium and thorium throughout the stalagmite, researchers can correlate amounts of rainfall ~ a measure of summer monsoon strength ~ to specific timeframes.

"Summer monsoon winds originate in the Indian Ocean and sweep into China," said Hai Cheng, author of the paper and a scientist at the University of Minnesota. "When the summer monsoon is stronger, it pushes farther northwest into China."

According to an article on Science Daily:

A lack of rainfall could have contributed to social upheaval and the fall of dynasties. The researchers discovered that periods of weak summer monsoons coincided with the last years of the Tang, Yuan and Ming dynasties, which are known to have been times of popular unrest.

Conversely, the scientists found that a strong summer monsoon prevailed during one of China's "golden ages," the Northern Song Dynasty. The ample summer monsoon rains may have contributed to the rapid expansion of rice cultivation from southern China to the midsection of the country. During the Northern Song Dynasty, rice first became China's main staple crop, and China's population doubled.

For example, the study showed that the dry period at the end of the Tang Dynasty coincided with a previously identified drought halfway around the world, in Meso-America, which has been linked to the fall of the Mayan civilization.

The study also showed that the ample summer rains of the Northern Song Dynasty coincided with the beginning of the well-known Medieval Warm Period in Europe and Greenland. During this time--the late 10th century--Vikings colonized southern Greenland. Centuries later, a series of weak monsoons prevailed as Europe and Greenland shivered through what geologists call the Little Ice Age.

Click here for the complete article on Science Daily. 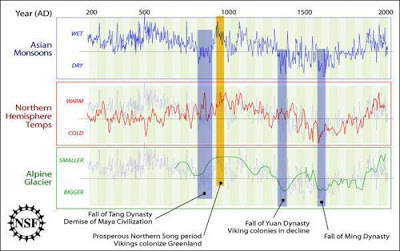 The National Science Foundation is correlating data on Asians monsoons, temperatures across the Northern Hemisphere and Alpine glacier growth and retreats, with historical societal developments.
Posted by Gregory LeFever at 9:33 AM