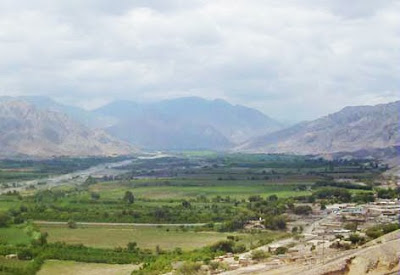 The ancient Peruvian settlement ruins were unearthed about nine miles from Palpa, above, south of Lima.
Peruvian and German archaeologists has discovered a 5,500-year-old human settlement near the southern town of Nazca, south of Lima.
"The find consists of a group of homes in which 19 graves were found, including the remains of a child younger than one with possible evidence of having been mummified," reported the newspaper El Comercio.

The article also said the find is the first discovery in southern Peru of an inhabited site corresponding to the late portion of the archaic period some 3,500 years before Christ.
Ornaments in Graves

One of the project researchers said that the excavations made at the site since last October enabled the team to find the remains of eight small oval-shaped and circular homes made by digging deep pits in the ground. Also found were up to 19 graves of children and adults interred individually inside the homes, which would seem to indicate that they were buried there after the homes were abandoned.

In some of the graves, archaeologists found carved bones and snail-shells, deer horns, necklaces and bracelets made from shells, but there was no concrete evidence of offerings to the dead or to dieties.

The researchers are seeking to expand their knowledge about the culture of southern Peru in the early epochs from about 5,500 years ago up to the Inca civilization in the 16th century.

Posted by Gregory LeFever at 7:55 PM