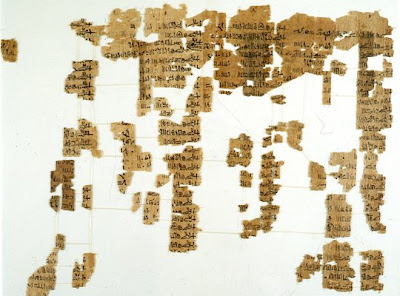 The new fragments will help complete the papyrus Turin Kingslist document archaeologists have been trying to assemble for more than a century.


Newly recovered 3,000-year-old papyrus fragments ~ discovered in a museum basement in Turin, Italy ~ may shed considerable light on early Egyptian history. Found stored between two sheets of glass in the basement of the Museo Egizio in Turin, the fragments belong to a unique document known as the Turin Kinglist.

"This is one of the most important documents to reconstruct the chronology of Egypt between the 1st and 17th Dynasty," Federico Bottigliengo, Egyptologist at the Turin museum, told Discovery News. "Unlike other lists of kings, it enumerates all rulers, including the minor ones and those considered usurpers. Moreover, it records the length of reigns in years, and in some cases even in months and days."

Written in an ancient Egyptian cursive writing system called hieratic, the papyrus was purchased in Thebes by the Italian diplomat and explorer Bernardino Drovetti in 1822. Placed in a box along with other papyri, the parchment disintegrated into small fragments by the time it arrived in Italy.

Now made of 160 fragments, the Turin Kinglist basically lacks two important parts: the introduction of the list and the ending.

Posted by Gregory LeFever at 6:12 PM