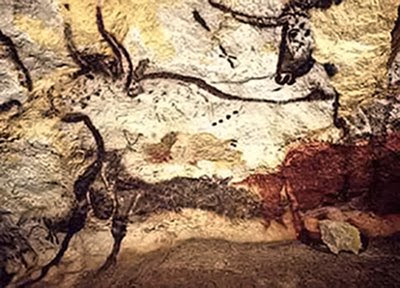 What our earliest ancestors ate has long been a subject speculation among anthropologists. But now, more and more evidence offers clues to their diet.

"The hallmark of the human diet is flexibility, the ability to find or make a meal in any environment," says anthropologist William Leonard of Northwestern University. He cites evidence for a variety of diet in different places, noting that animal herders in Siberia get more than half of their food from meat, while meat makes up only 5 percent to 6 percent of the diet of potato farmers in Peru.

High nutrition diets became necessary for humans to meet the increasing energy demands of the large brain, and the hunting-gathering lifestyle developed as humans took advantage of grazing animals such as antelope and gazelle. The staple foods of humans are much more nutritionally dense than those of other large primates, which can subsist on leaves and fruit, he said.

The size and shape of the jaw and wear on the teeth can tell us a lot about what ancient people ate, said Peter Ungar of the University of Arkansas. Yet it can sometimes be misleading. For example, one skull with large, flat teeth was thought to indicate a diet heavy in nuts that could be chomped open. But tooth wear and other evidence indicates that this individual mostly ate softer items for an everyday diet.

"Maybe what we are looking at (in the teeth) is a fallback adaptation for when the preferred foods weren't available," he suggested.

That image is of paleolithic times i.e. the early human diet and the evidence cited for flexibility is from neolithic times...

Thanks, Jonathan. I picked it more for the image of the animals, but I appreciate your astuteness.

Yet an equal diet of fruit or nuts could easily provide just as much energy as other wild foods cited, so long as they are abundantly available. I'm not saying that this is the way that we evolved eating but his argument is false.

"the hunting-gathering lifestyle developed as humans took advantage of grazing animals such as antelope and gazelle. The staple foods of humans are much more nutritionally dense than those of other large primates, which can subsist on leaves and fruit, he said."

I came upon this as I was searching for "Ancient Florida Artifacts".