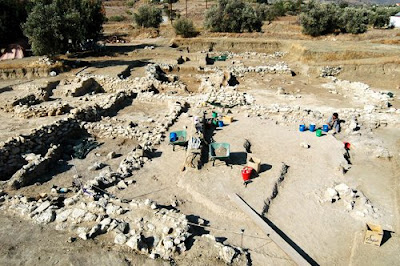 Archaeologists in the ruins of Prygos, near where the temple was situated.
Italian archaeologists believe they have discovered the oldest religious site on Cyprus, a triangular temple that matches Biblical descriptions of temples in Palestine.

Maria Rosaria Belgiorno, who heads an Italian archaeological mission in Cyprus, said the 4,000-year-old triangular temple predates any other found on the east Mediterranean island by a millennium.

"For sure it's the most ancient religious site on the island," she told The Associated Press. "This confirms that religious worship in Cyprus began much earlier than previously believed."

The 2,150-square-foot temple ruins were discovered last year outside Pyrgos, a village near the south coast where previous digs unearthed a settlement dating to 2,000 B.C. Belgiorno said evidence points to a monotheistic temple with a sacrificial altar that resembles Canaanite places of worship described in the Bible.

"The temple has a very peculiar shape for a building, which is very rare," she said.

Although it is difficult to say with certainty, she said the Pyrgos settlement was home to around 500 people. Their origins are unclear, but they had trade links with ancient Egypt and Palestine. A major earthquake destroyed the settlement in 1,850 B.C.

Posted by Gregory LeFever at 6:49 PM