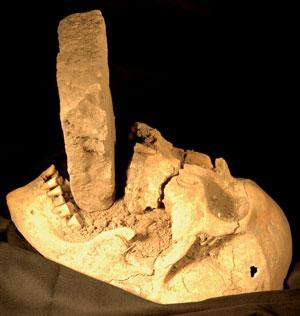 A woman’s skeleton with a small brick in her mouth ~ exhumed in Venice, Italy ~ is being considered the first known example of a so-called “vampire.” The brick is believed to be part of an exorcism designed to stop the spread of the black plague.

The skeleton was removed from a mass grave of victims of the Venetian plague of 1576. At the time the woman died, many believed the plague was spread by "vampires" chewing on their shrouds after dying. Grave-diggers put bricks in the mouths of suspected vampires to stop them doing this, according to Matteo Borrini of the University of Florence.

The belief in vampires probably arose because blood is sometimes expelled from the mouths of the dead, causing the shroud to sink inwards and tear. Borrini, who presented his findings at a meeting of the American Academy of Forensic Sciences in Denver last week, claims this might be the first such vampire to have been forensically examined.

Posted by Gregory LeFever at 6:33 PM