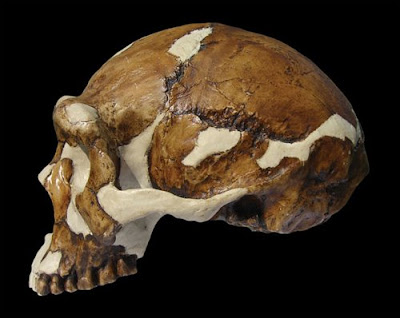 Homo erectus skull from the Zhoukoudian caves.
A new and more accurate dating method shows Peking Man may be 200,000 years older than previously thought. Bones of Sinanthropus pekinensis ~ a Homo erectus commonly known as Peking Man ~ were discovered in the 1920s during cave excavations near Beijing and now believed to be 750,000 years old.

Scientists have used various techniques to try and date the fossils, but a lack of suitable methods for cave deposits has limited their accuracy. Shen and his colleagues used a relatively new method that examines the radioactive decay of aluminum and beryllium in quartz grains, which enabled them to get a more precise age for the fossils.

"The analysis dated the finds to around 750,000 years old, some 200,000 years older than previous estimates and indicates a hominin presence in the area through glacial and interglacial cycles. The results should help to build a more reliable chronology of human evolution in East Asia," the researchers wrote.

Posted by Gregory LeFever at 12:13 PM