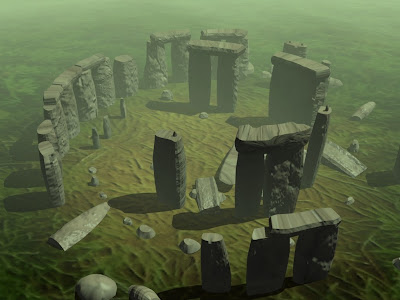 With all of the recent archaeological activity ~ including new theories ~ regarding England’s famed Stonehenge, TIME magazine on Friday published a brief compendium of the various beliefs regarding the site’s origins and purpose. Here is TIME’s conclusion:

The current consensus (if such a thing even exists) is that Stonehenge was used as a burial site. Archaeologists have found skeletal remains at the site dated to a 500-year period beginning in 3000 B.C. One dubbed the site a "domain of the dead" and say the bodies found likely belong to a select group of elite ancient people. It's the most solid evidence yet, but it doesn't preclude Stonehenge having a dual purpose as an astrological calendar or as a religious site. The only thing certain is that as the sun rises and sets to mark another equinox, another day will pass with the complete answer of the site's origins still firmly lodged in the past. Perhaps that's how it's meant to be.

Click here for the complete TIME magazine article.
Posted by Gregory LeFever at 9:29 AM

Another hypothesis would be that the monument was used once every x time by a foreign elite, let's say when the sun and the moon came back to the same situation and phase in the sky every 19 years (metonic cycle). Stonehenge would remain "abandoned" most of the time, so the local rulers could use it as a sacred burial ground.