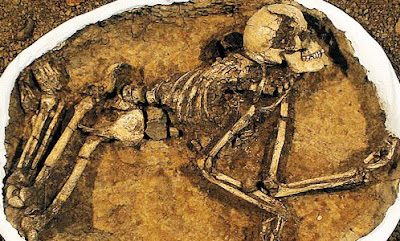 One of the 7,000-year-old skeletons unearthed at the Herxheim village.
Archaeologists are speculating on what could have led to an extensive occurrence of Stone Age cannibalism among villagers near Herxheim, Germany.

"It is impossible to establish direct proof of cannibalism,” says Bruno Boulestin, an anthropologist at Bordeaux University. “But here we have systematic, repetitive gestures, which suggest that the bodies were eaten."

According to a report in The Guardian, thousands of human bones have been unearthed at Herxheim, near Speyer. About 7,000 years ago farmers ~ who grew wheat and barley and raised livestock ~ built a village of four to 12 houses, the post holes of which have survived.

During the first series of excavations at the end of the 1990s, numerous injuries visible on the skeletons were taken as evidence that the victims had been massacred. But in 2008 Boulestin examined the fragments recovered from one of the trenches, pointing out that nearly 2,000 samples belonged to fewer than 10 individuals.

The marks of breaking, cutting, scraping and crushing indicate that the bodies were dismembered, the tendons and ligaments severed, the flesh torn off and the bones smashed. The vertebra were cut up to remove the ribs, just as butchers do today with loin chops.

What can this bloodbath mean? The potsherds found among the human remains suggest it must have occurred over a period of no longer than 50 years. There is nothing to imply the victims were killed for food. Only under extreme conditions would 100 or so farmers have been able to overcome about 10 times their number. The archaeologists have therefore concluded that this was some form of ritual killing.

Click here for the complete article in The Guardian.

Posted by Gregory LeFever at 6:26 PM