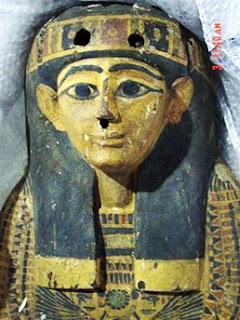 Egypt expects U.S. authorities to return a 3,000-year-old wooden coffin illegally smuggled out of Egypt more than a century ago. Zahi Hawass, head of Egyptian Antiquities, said the nearly 5-foot-long coffin was stolen in 1884 from a tomb in Luxor, an ancient pharaonic capital in southern Egypt.

The ornamented coffin belonged to Pharaoh Ames of the 21st Dynasty, which ruled over Egypt from 1081-931 B.C.

According to the Associated Press, the coffin is currently in the hands of customs authorities in Miami, who confiscated it after it was shipped to the United States from Spain. Egypt has launched a drive to recover its antiquities taken abroad, including some residing in famous museums.
Posted by Gregory LeFever at 9:01 AM