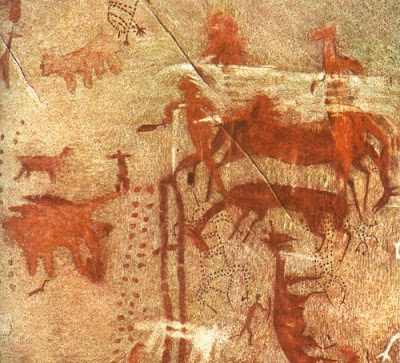 A painting from Peru’s Toquepala caves, similar in style and content to the newly discovered paintings near the Tambolic caves.


In the past two years, a Peruvian archaeologist has discovered more than 10,000 cave paintings ~ dating back more than 6,000 years ~ in the Peruvian section of the Amazonian jungle. The paintings have been hidden by lush vegetation for centuries, in caves near the village of Tambolic.

“Over the past two years,” says archaeologist Quirino Olivera, “we have found 6,000-year-old cave paintings, especially in the Cuaco and Yamón mountains, located in the Lonya Grande district. These are in addition to those recently found in Tambolic, where many of these ancient images are concentrated.”

According to Olivera, most of the Tambolic paintings depict hunting scenes and are similar to those found in Toquepala. The artists used mainly red, brown, yellow and black pigments.

The Toquepala caves are located in the western Andes at 9,000 feet above sea level. They are noted for cave paintings depicting scenes of hunters corralling and killing a group of guanacos, a camel-like animal native to South America. Known as “chaco” in the Peruvian Andes, this hunting technique consists of forming human circles to corral the animals and either capture or kill them.

Posted by Gregory LeFever at 4:46 AM

Outstanding blog you have here. As a huge fan of ancient history, I'm always on the lookout for new sites to follow, and I will be following yours from now on.

Thank you for your kind comment, Sapheryerblu. I hope I can continue to live up to your expectations. I look forward to having you back. ~ Greg