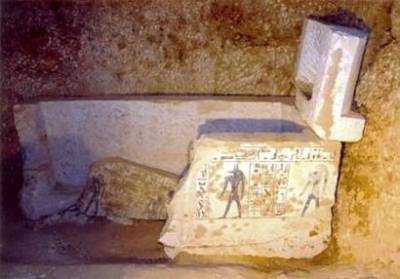 A section of the tomb Japanese archaeologists believe belongs to the noblewoman Isisnofret, granddaughter of Ramses II.
There is archeological disagreement over a 3,000-year-old tomb of an Egyptian noblewoman recently unearthed in the Saqqara necropolis south of Cairo.

Japanese archaeologists who found the tomb believe it belongs to Isisnofret, a granddaughter of Ramses II, the famed 19th Dynasty pharaoh who reigned over Egypt for about 68 years from 1304 to 1237 BC.

The tomb contained a broken limestone sarcophagus bearing the name of Isisnofret and the title "noble woman", three mummies and fragments of funerary objects. Isisnofret's last resting place is in an area of Saqqara where a team from Waseda University were excavating the tomb of Prince Khaemwaset, a son of Ramses II.

However, Egyptian antiquities chief Zahi Hawass told AFP he believes the tomb dates from the 18th dynasty instead of the 19th, because of the style of construction. He also dismissed the "similarities in the names" saying that there were many women called Isisnofret in ancient Egypt.

Posted by Gregory LeFever at 6:26 PM