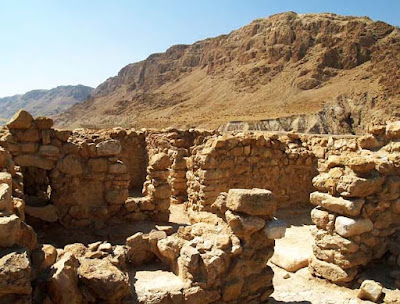 A portion of the ruins near Qumran, long considered to be an Essenes settlement, near the caves where the Dead Sea Scrolls were discovered in 1947.


Religion scholars seeking evidence of the historical Jesus frequently claim he could have been a member of the Essenes, a Jewish ascetic cult. Now new scholarship by Rachel Elior of the Hebrew University in Jerusalem contends the Essenes may never have existed.

Scholars have long believed that the obscure sect may have had an impact on early Christianity, positing that John the Baptist or even Jesus may have spent time with them. Elior argues, however, that an analysis of the scrolls shows that the authors were recording the routines and practices of the cohanim, or priests, descended from Zadok, the first high priest in Jerusalem after the conquest of the city by the Israelites hundreds of years before.

“I believe any serious scholar truly can’t but admit that the law reflected in the scrolls is a Sadducee law,” she tells the London Times, pointing out that there were no corroborating historical records ~ either in Jewish or early Christian literature ~ to indicate that a large sect of celibate men lived in the area over a long period of time.

“The Essenes are only a literary invention of a Utopian society that lived a most benevolent and chaste life,” she said.

According to the London Times article:


Confusion over existence of the Essenes arose from scholars using other, later texts as their sources, Elior said. She noted that the Jewish-Roman scholar Josephus mentioned them, but that he was writing hundreds of years later.

Posted by Gregory LeFever at 12:30 PM

No serious scholar is ignorant of the fact that a rabbi (more properly Ribi) could only have been a Perushi (Pharisee) while the "Essenes" were Tzedoqim (Sadducees).

Elior's book is a non-serious peripheral argument that the Tzedoqim weren't called "Essenes." This is neither new, particularly controversial nor of any significance. Their Oral Law was called Maaseh (doing, making, practice). So whether Josephus was accurate in calling them Osin (doers, makers, practicers), which was corrupted to "Essenes" is of little import.

Thank you for your fascinating comment. As you say, this may all be a tempest in a teapot, although the London Times put a ~ perhaps undeserved ~ amount of importance on Prof. Elior's findings. Certainly it is a difficult area for one to have accurate perspective unless one is well versed in Jewish sholarship.

[“I believe any serious scholar truly can’t but admit that the law reflected in the scrolls is a Sadducee law,” she tells the London Times, pointing out that there were no corroborating historical records ~ either in Jewish or early Christian literature ~ to indicate that a large sect of celibate men lived in the area over a long period of time.

“The Essenes are only a literary invention of a Utopian society that lived a most benevolent and chaste life,” she said.


According to the London Times article:

* The Essenes are believed to have been a religious sect in Palestine from about the 2nd century BC to the end of the 1st century AD.
* The New Testament makes no mention of them, and accounts by Pliny the Elder, Philo of Alexandria and Josephus differ in significant details.
* Pliny, in his day, fixed their number at 4,000. They are thought to have moved to the desert in opposition to the powers in Jerusalem and lived in secluded monastic communities.
* It is believed that they considered themselves to be a chosen elect and that messianic figures would appear to them and usher in a new age, and that they spent their days engaged in manual work or study of Scripture.]

So this Elior is stating that what Jewish and Christian "literature" aka MYTH did or didn't say is to be believed as "corroborating literature" over what the ancient historians stated?

ANY SERIOUS scholar knows full well the "Judaic" myths were lifted from and altered Babylonian, Sumerian and Egyptian myths/histories. In fact, the Hyksos Pharaohs were the proto-typical "Israelites" and all the myths "Judaic" come from that.

Except the "Abraham" myth, which was, of course, Brahma and his consort goddess Saraisvati, from India. A priestly caste that went out to spread the word of Brahma, and would have passed through Ur..."Abraham's" supposed birthplace. In fact, an artifact unearthed in Ur shows a RAM caught in a THICKET, dated BEFORE the supposed time of "Abraham." And what was "Abraham" father's profession? A maker of idols (statues.) Ram caught in a thicket...now where have I heard that myth before????

But one has to release themselves from the dogma and propaganda before one can open one's eyes.

Where does Josephus say the original "Jews" come from?

India. No wonder Elior wishes to discredit him.

Is there ANY solid science to be found here in this article? Nope.

I’m very glad to found this website because; it carries awesome and actually good data in favor of readers.

I really enjoyed reading your article. I found this as an informative and interesting post, so i think it is very useful and knowledgeable. I would like to thank you for the effort you have made in writing this article.

Pretty good post. I found your website perfect for my needs. Thanks for sharing the great ideas.

Thanks for sharing your article and for giving us the chance to read it. It is very helpful and encouraging. Visit my site too.

amazing and nice looking site please love it and make more effective… keep it up.

Love it! Very interesting topics, I hope the incoming comments and suggestion are equally positive. Thank you for sharing this information that is actually helpful.

I’d must examine with you here. Which is not something I often do! I take pleasure in reading a put up that may make people think. Additionally, thanks for allowing me to comment! online casino gambling