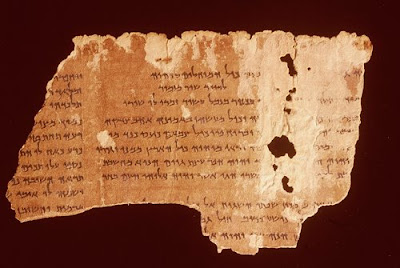 A sample of a Dead Sea Scroll fragment.
(The Dead Sea Scrolls have been the subject of intense scholarship for 60 years, but now questions are arising regarding their true authorship and whether the presumed authors ~ a sect some say Jesus may have joined ~ even existed at all. I believe this debate is potentially significant enough to warrant these multiple posts for today.)


The world of commonly accepted Biblical history is being rocked by new scholarship contending the Dead Sea Scrolls are the writings of ancient Jewish priests in Jerusalem and that the cult long-believed to have authored the scrolls never existed at all.

The 930 so-called Dead Sea Scrolls were found by a shepherd in a cave at Qumran ~ on the edge of the Dead Sea ~ in 1947. The discovery is regarded as one of the most important archaeological finds of the past 2000 years.

Since the discovery, scholars have believed that the Dead Sea Scrolls were the work of an ascetic Jewish sect called the Essenes (see post below), who lived in the 1st century in the mountains and recorded their religious observances on parchments.

According to the London Times, a new theory challenging the broadly accepted history is sending shockwaves through the archaeological community, even leading to the arrest of one prominent scrolls scholar’s son in the United States (see second post below).

Rachel Elior, a professor of Jewish philosophy at the Hebrew University in Jerusalem, claims in a forthcoming book entitled Memory and Oblivion that not only were the 930 scrolls written by Jewish priests living in Jerusalem but that the Essenes as a sect did not exist.


The professor also noted that when the texts were unearthed in 1947, the area around Jerusalem was caught up in the war that created the Jewish state, and that early hurried assessment of their origin set scholars on the wrong track for decades. The theory has stirred controversy in academic circles, with established scrolls experts vehemently rejecting the new interpretation.

Posted by Gregory LeFever at 12:36 PM

Well, since there was no "King Solomon" (in fact, the "Solomon" biblical myth was patterned after the historical Ramses II) and no "Temple of Jerusalem", exactly what is left of her theory?

As I mentioned in response to other comments you've made, your information is quite interesting. I want to research for myself some of the points you raise, which don't seem at all outlandish from the lack of archaeological evidence.

Thank you for questioning the standardized conclusions some of these articles are repeating.