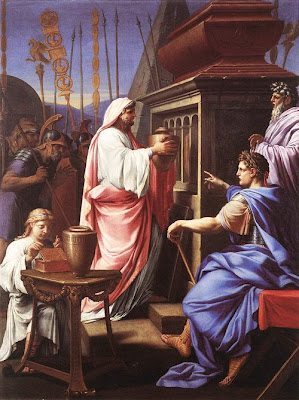 "Caligula Depositing the Ashes of His Mother and Brother in the Tomb of His Ancestors," by Eustache Le Sueur, 1647.

Archaeologists in Rome have found the underground passage where members of the Praetorian Guard assassinated the cruel Emperor Caligula.

The underground corridor discovered beneath the imperial palaces on Palatine Hill matches exactly the description given by the Roman historian Suetonius, who wrote that the Emperor was stabbed to death there after watching an entertainment, as the result of a conspiracy hatched in the Roman Senate.

Gaius Julius Caesar Augustus Germanicus ~ who lived from 12 to 41 AD and was known by his nickname Caligula (Little Boots) ~ was the third emperor of the Roman Empire after Augustus and Tiberius, and like them a member of the Julio-Claudian dynasty.

According to the London Times:

Unlike his father Germanicus, a widely admired and upright Roman general, Caligula became a byword for cruelty, excess, insanity and sexual perversion. His nickname derived from the fact that as a small boy he dressed up in a miniature uniform while accompanying his father on military campaigns.

Some scholars maintain that Caligula murdered Tiberius to ensure the succession, or at least ordered his murder. On becoming emperor Caligula was at first hailed as the son of Germanicus, but his behaviour became increasingly psychopathic after he fell ill in AD37 and nearly died. He had all possible opponents, real and imagined — including members of his own family — banished or killed, and seized their properties.

He also proclaimed himself a living god. According to Suetonius, Caligula had incestuous sex with with his sisters Agrippina, Drusilla and Julia Livilla. He also supposedly tried to confer the title of consul on his favourite horse, Incitatus, who had a stable of marble and a collar of precious stones, and had flakes of gold mixed into his oats. Some historians have suggested, however, that such stories were embellished or even invented by Caligula’s many enemies. 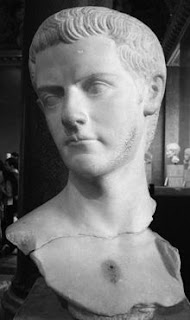 Maria Antonietta Tomei, a Rome archeologist, said she was “absolutely convinced” that the passage was the one in which Caligula met his end. Although it bore builders’ stamps from the time of Claudius, it already existed at the time of Caligula, and had only been restructured by his uncle and successor.

“It is clear that it was Claudius and not Nero, as commonly thought, who gave shape to the imperial palace complex on the Palatine Hill,” she said.
At right is bust of Caligula from The Louvre.

Click here for the London Times article.
Posted by Gregory LeFever at 1:48 PM