The 200 graves unearthed earlier this year in the largest Stone Age cemetery yet discovered in the Sahara Desert have revealed bodies of two successive populations. These people occupied a southern Sahara region called Gobero in what is now the country of Niger. At the time of their Stone Age occupation, the desert was a green and fertile savannah.
First were the Kiffians, tall hunters of wild game who also fished with harpoons carved from animal bone. The later group were the Ténérians, a smaller people who lived there, hunting, fishing and herding cattle.

Paul Sereno, a University of Chicago scientist who discovered the ancient graveyard about eight years ago while searching for dinosaur bones, says the Gobero settlements started about 10,000 years ago and lasted about 5,000 years.

In describing the 200 graves, he said some burials were accompanied by pottery and ivory ornaments. A girl was buried wearing a bracelet carved from a hippo tusk. A man was seated on the carapace of a turtle. A scene of particular poignancy was the triple burial of a woman lying on her side, facing two young children, whose arms reached out to the woman in an embrace.

Here are some photos of the archaeological work being done by Dr. Sereno and his team at the Gobero site, taken by Mike Hettwer of National Geographic. 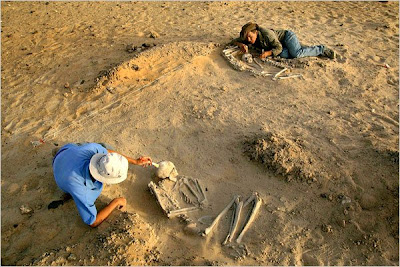 Paul Sereno and Elena Garcea excavate adjacent burials at Gobero, the largest graveyard discovered to date in the Sahara. 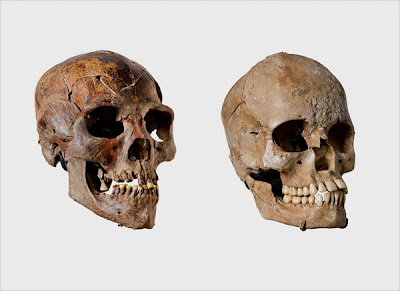 Two distinct cultures lived at Gobero. The Kiffians, like the male at left, were tall. This skull was dated at 9,500 years ago. A dry interlude chased the Kiffians away. When the rains returned, the Tenerians, who were shorter and leaner, populated the area. The Tenerian male, right, died when he was about 18. The skull was dated at 5,800 years old. 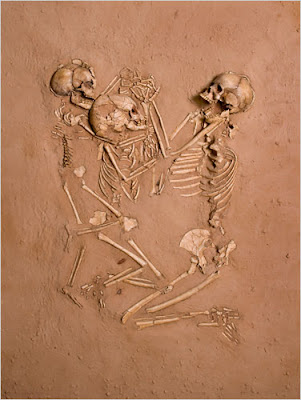 In this grave, a Tenerian woman and two children, about 5 and 8 years old, were posed in an embrace. Pollen under the skeletons indicate that they were laid on top of flowers. The bones show no sign of the cause of death. 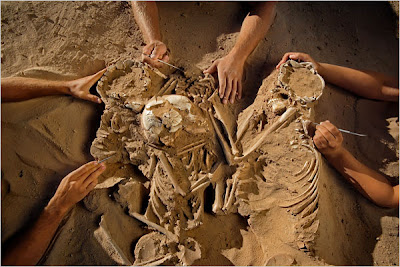 A close-up of the burial of the woman and two children. The 5-year-old is at left. 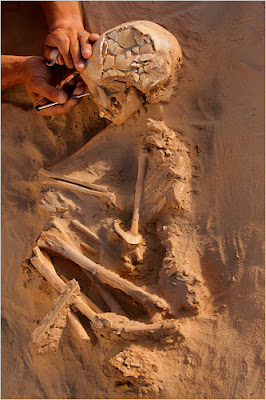 This Tenerian girl, about 11 years old, died 4,800 years ago. She was buried wearing a bracelet carved from a hippopotamus tusk on her upper arm. The Tenerians buried their dead on top of dunes near a lake. 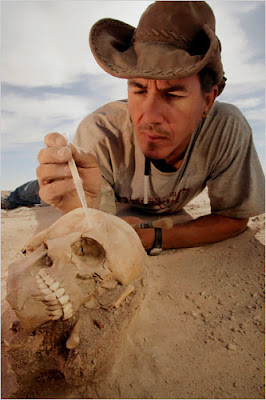 Paul Sereno works to stabilize the skull of a woman of a nomadic culture knowns as the Tenerians, who lived in the area in Niger from 6,500 to 4,500 years ago, when rains fell and lakes dotted the Sahara.