Archaeologist Finds Halloween in Her Own Yard 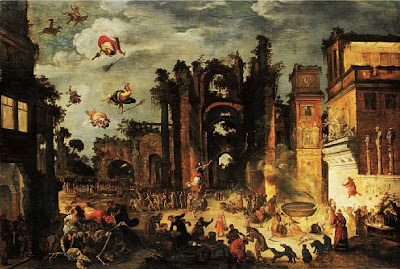 Witches Sabbath in Roman Ruins, Jacob van Swanenburgh, 1608.
Archaeologist Jacqui Wood of Cornwall, England, was digging around in her yard a few years ago and accidentally unearthed the site of witchcraft rituals dating back at least to the 1600s ~ but also with possible indications of more recent practice.

"Over the last 30 years I've been quick to dismiss ritual as an explanation for unusual archaeological finds," Wood told Archaeology magazine. "It usually means that the archaeologists can't think of anything better. So now it seems especially ironic that I end up with a site absolutely full of ritual." 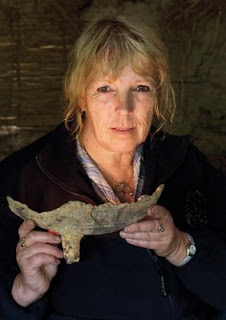 Wood (shown here with a fragment of a cauldron recovered from the site) moved to her home 15 years ago because it was an ideal location for her work in experimental archaeology, replicating ancient techniques. In the late 1990s, she wanted to recreate an ancient kind of furnace. "I dug down into the ground to construct a shelter close to the furnace and I discovered a clay floor," she says. Based on flint fragments embedded in the clay, a Danish specialist dated the site to the late Mesolithic, around 8,500 years ago.
Archaeology states:

But as Wood and her team excavated the platform over the next few seasons, unusual features began to emerge. They came across strange rectangular holes, about 15 by 10 inches, in the clay.

"At first we thought they must be postholes or something," says Wood. But the first of the holes, about 6 inches deep, was lined with white feathers. The pits cut through the clay platform, so Wood knew that they had to date to a later time, but only an expensive radiocarbon test could pin it down. "We guessed it might have been a bird-plucking pit, a common farming practice at the turn of the 19th century," says Wood.

But that couldn't be the case--Wood found that the feathers were still attached to the skin, which had been laid in the pit with the feathers facing inward. A bird expert from the local zoo confirmed they came from a swan. On top of the swan skin, Wood found a pile of pebbles and a number of claws from different birds. She later learned that the stones came from a coastal region 15 miles away, though no one knows why they were brought from so far. Someone had gone to considerable trouble to gather the contents of this pit. That season, Wood and her colleagues found eight pits, two of which contained odd collections of bird parts, and six of which had been emptied, but with a few telltale feathers and stones left behind.

Wood eventually became convinced that only witchcraft could explain her unusual finds, but no one had ever heard of anything like this. Radiocarbon tests revealed the swan skins dated to around a.d. 1640, the time of civil war in England and a very dangerous period to be practicing witchcraft.

"Any sort of pagan worship was classified as witchcraft at that time, and punishable by death," says Wood. "If caught, they would have been burned at the stake." To make things worse, swans were royal symbols and property of the crown, so killing a swan was doubly risky.

Wood and her colleagues had further spooky discoveries ahead. Not far from the three pits, they uncovered the remains of a spring-fed pool, carefully lined with white quartz, and containing 128 textile scraps, six medieval straight pins, shoe parts, heather branches (associated with luck), fingernail clippings, human hair, and--it doesn't get more witch-like--part of a cauldron.
Click here for the complete Archaeology article. Archaeologists and students working in the area where pits were discovered with swan skins, pebbles, bird claws and other indications of rituals.

Posted by Gregory LeFever at 11:57 AM

Interesting material Greg.I really enjoyed reading the full version of the article published in"Archeology.Regardless of rigorous witch trials that were in full swing during 16th. and 17 th. centuries the practice was impossible to eradicate."During the 1650s.more than 25 people were sent to Laureceston Gaul/prison/ in Cornwall" says J.Semens" expert on witchcraft/quoted in the article/.I think the most amazing fact is what has happened after the discovery .The word has spread and the quartz -lined pools became a magnet for those of mystical inclination.Present -day druids,shamans and witches started their pilgrimage to the 6,000 years old pools.A local homeopath arrives every day to get his drinking water from this special place.It is fascinating how some pagans rituals are encoded in the human beings and nothing can erase them from our collective memories.The practice is still alive being shoved under the rug of the main stream religions ,prosecuted but never eradicated.

I agree, Ludmil. There is a shift occurring in consciousness and many of the 'old ways' are being reconsidered in light of new scientific technologies and findings. The bondage of organized religion is disappearing rapidly, and much of the fundamentalism we are seeing in in the world today is but the death throes.

Most interesting and enthralling!

Great article, I must make the point that though officialy Cornwall is part of England, in reality Kernow (its real name) has never been part of Anglo Saxon culture and the Cornish (Kernewek) will never admit to being English, so therfore its no real suprise that you will find reletively modern finds of witchcraft and can even see pagan festivals openly practised to this day.Even though its said the devil is too scared to travel in Kernow as he knows he would either be turned into a saint or put in a pie, the Kernewek are and always will be pagans at heart or by instinct. I would love to hear more about finds in my favourite part of Britain