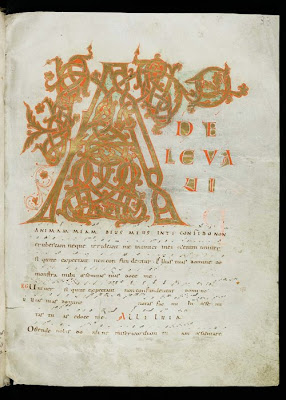 A random page I downloaded this morning from a circa 980 AD collection of short hymns and songs. The images are easily enlarged for detailed viewing.

A vast collection of medieval books ~ many written and illustrated by hand earlier than 1000 AD ~ is going online. With the help of a $1 million grant from the Mellon Foundation, the books are being scanned to preserve them for posterity.

The effort to digitize contents of the wonderfully baroque abbey library, the Stiftsbibliothek in St. Gallen, Switzerland, is a reaction to 2002’s devastating floods in Dresden.

According to today’s New York Times, the Stiftsbibliothek collection includes material as varied as curses against book thieves, early love ballads, hearty drinking songs and a hand-drawn ground plan for a medieval monastery, drafted around A.D. 820, the only such document of its kind.

This morning, after reading the Times article, I visited the Stiftsbibliothek collection website, where there are now 144 manuscripts available for viewing. I selected one manuscript at random and then one page of it. Everything was easy and informative, after I found the little link in the upper right corner of the screen where I could select English for viewing the site.

My random page turned out to be from a 980 AD antiphonary ~ a collection of short hymns or songs ~ assembled by a monk named Hartker and now considered “an invaluable monument of music history.” 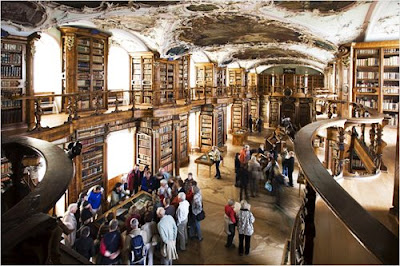 The magnificent Stiftsbibliothek library, founded in the 9th century in eastern Switzerland, houses one of the most valuable collections of medieval manuscripts in the world.

Hello, this is my first time here and I'm looking forward to returning. I hope you will find the time for a counter visit so we can stay connected. I find your blog very interesting and would like to follow it. I also see we share some interests i.e. I see one of your favourite movies is babel, did you like the story, what do you think about it in the way GLOBALISATION is linked to the tower of babel?

Red Eyes: Thanks for visiting my blog. As for correlating globalization with the Tower of Babel, I see many potential symbolic links. To name a few:

1. The tower was an attempt to manifest globalization, with all peoples speaking the same language, same currency, same infrastructure, etc.

2. The tower was an act of unification of all the peoples who had journeyed to Babylon (historically just south of Baghdad), much like the European Union, the economic interdependencies of today's world, the social and political sameness that technology is producing, etc.

3. The builders wanted to "make a name for themselves," according to Genesis.

It's this third (of many others) possibility that intrigues me most. According to the Biblical account, the tower's builders decided they wanted to honor themselves and their nations with this tower "with its top in the heavens," instead of honoring their God.

I prefer to interpret it that they built their tower as a monument to earthly accomplishment, while putting aside the spiritual implications of their accomplishments. (My emphasis is on "spiritual" and not "God.")

So, they constructed an impressive monolith that lacked higher purpose, thus everything fell apart and "the people were scattered." The people lost their ability to easily communicate or relate to one another, and their infrastructure was made a shambles - all because the motive was material oneness, but not spiritual.

That may be more than you were asking for, but that's my take on the Tower of Babel story, at least in terms of globalization.

We need to keep ourselves spiritually sound, first and foremost.

That is a marvelous interpretation, Gregory and it seems as though it's right on the mark.

The Stiftsbibliothek is wonderful! Thank you for pointing it out. Such a researcher you are!