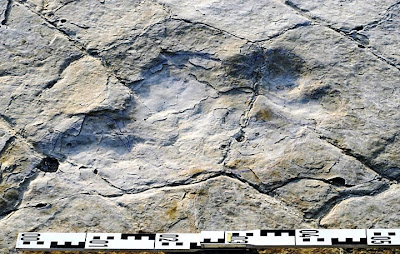 One of the footprints causing a paleontological tempest in Europe.
A German paleontologist has ignited arguments about what he claims is new proof of the world’s oldest dinosaur.

Cajus Diedrich says large footprints he found embedded in a former limestone marsh are 243 million years old, while some other paleontologists say he’s off by at least 15 million years. At any rate, the tracks Diedrich discovered in late 2007 near Bernburg, Germany, are from a huge creature. Some of the tracks are about 14 inches long, indicating the dinosaur weighed nearly a ton.

Diedrich (shown at right) believes the tracks were made by the “missing link” of the dinosaur world, a giant reptile known as the Prosauropod, an ancestor of the long-necked giants such as the Brontosaurus, and an evolutionary bridge with the smaller, lithe lizards that also roamed the region.

But Hartmut Haubold, a paleontologist from Halle, calls Diedrich’s claims ridiculous. "It's as if someone found a 10-million-year-old stone and claimed it was a hand axe made by humans,” he says. “Dinosaurs didn't come into existance until a good 15 million years later than Diedrich claims."

Martin Sander, a paleontologist at Germany's Bonn University, also has doubts. "The first dinosaurs were smaller creatures," he explains, "about as big as monitor lizards. That a much larger dinosaur would have lived so much earlier is extremely improbable."

Diedrich says his critics are upset that they didn't make the discovery and that he's being attacked unfairly. "I don't turn to colleagues for advice anymore, because many of them don't follow the scientific code of honor," he says.

Click here for the Der Spiegel article.
Posted by Gregory LeFever at 12:49 PM

Reading the full version of the article in"Der Spiegel" I realised that is too early to draw conclusions on this discovery.All facts are not revealed yet to be discussed from the international experts.It looks more like a publicity stint on the part of this german paleontologist.But wouldn,t be great if he struck gold and unearth the "gigantic"creature at the end of the tracks?

Yes, it will be interesting to see how other notable paleontologists weigh in on this one. Often it is just one person who discovers something that causes history to be rewritten.

You'd think paleontology would be a rather steady, plodding, unemotional profession, but here you see first-hand how passionate and confrontational it can get. Such things happen everywhere, I guess.