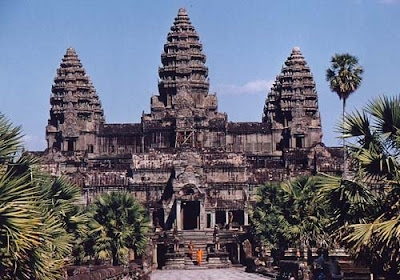 The scientists believe that before an alternating series of droughts and monsoon floods hit Angkor from the mid-14th to late 15th centuries, the capital of the Khmer empire had already had extensive problems with its vast, complicated water system.
Ultimately, it became impossible for the city to keep pace with further pressures from extreme weather. Although there was ongoing conflict with neighboring states, it was the over-built water infrastructure that locked Angkor into a trajectory of decline.

Before Angkor vanished into the jungle in the 17th century, it was the world's largest low-density pre-industrial city. Between the ninth and 13th centuries, the metropolis was home to as many as 750,000 people.
Click here for the article in The Australian.
Posted by Gregory LeFever at 8:13 PM